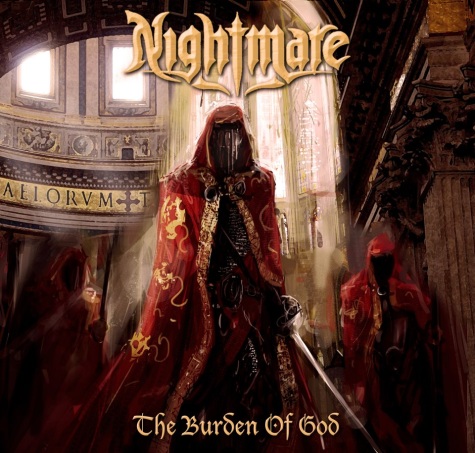 "Sunrise In Hell", the new video from French power metallers NIGHTMARE, can be seen below. The clip was helmed by French producer Stéphane Gilbart of Nightframe Media Visions and produced and edited by Richard Conord. The band's new guitar player, Matt Asselberghs, stars in the video, which features additional appearances by French models Sonia Zina and Lady Akasha.

"Sunrise In Hell" comes off NIGHTMARE's new album, "The Burden Of God", which was released in May through AFM Records. The CD was laid down at the Peek studios in the south of France with producer Patrick Liotard.

"The Burden Of God" track listing:

"One Night Of Insurrection", the first-ever live DVD/CD from NIGHTMARE, was released in February 2011 via AFM Records. The set was filmed/recorded in Grenoble, France and contains NIGHTMARE's special 30th-anniversary show, including guest appearances by the band's former members. Also included us footage of NIGHTMARE's performance at Summerblast in Israel.

"Insurrection", the seventh album from NIGHTMARE, was released on September 11, 2009 via Germany's AFM Records.