NIGHTWISH: 'End Of An Era' DVD Certified Platinum In Germany

Finnish symphonic metallers NIGHTWISH were honored with a platinum award in Germany for sales in excess of 50,000 copies of their "End of an Era" DVD. The disc, which was released in 2006, contains footage of the band's final performance with former singer Tarja Turunen, recorded in October 2005 in Helsinki, Finland.

The award was presented to the band (see photo below) at this year's Rock Am Ring festival, where the band played on the main stage in front of more than 80,000 people.

NIGHTWISH's latest album, "Dark Passion Play", was certified gold in Germany for sales in excess of 100,000 copies within a week of its release in September 2007.

NIGHTWISH recently topped the single chart in Finland with the band's latest release, "The Islander". The song's accompanying video was shot last autumn in Rovaniemi, Finland and was directed by Stobe Harju. 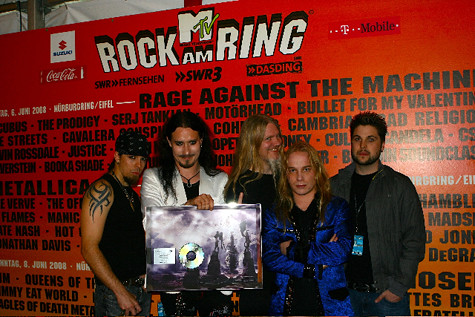