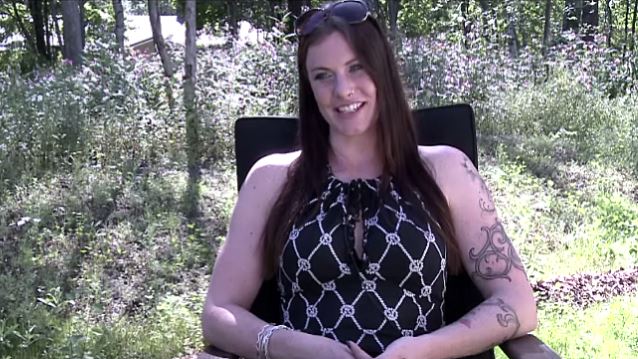 Finnish / Dutch / British symphonic metallers NIGHTWISH have released the sixth in a series of video clips featuring footage from the making of the band's new studio album, due in the spring of 2015 via Nuclear Blast. Check it out below.

NIGHTWISH's Dutch singer Floor Jansen, who officially joined the band last year, recently moved to Finland in order to learn the language and facilitate communication and effective interpersonal relationships among the bandmembers.

"For a couple of weeks I've been living in here in Joensuu, and I've been full time in Finland, enjoying the Finnish summer, which has been extraordinarily warm and light, of course," Jansen said in the video. "It's normal for Finnish people that the light is always there also in the night, but for me it was new. And, yeah, so far I've been loving it."

Asked about the Finns' reputation for being "quiet and shy," Jansen said: "I think people are a little more inward, not very easily to let you in. But once they do, you get close to a person for real. That I've noticed. And here in Joensuu and the area, people are very helpful. Coming here as a foreigner and not knowing my way yet, I can ask anyone and even if they don't know, they'lll try to help you. [They are] super friendly."

Regarding her command of the Finnish language, Jansen said: "My Finnish is… I'm sounding like a three-year-old, at my best. It's super hard to really have a conversation, unfortunately. I know a lot of words, and so reading signs and stuff is becoming better, or going to a supermarket. But some specific words, of course, you don't get in your first year. Plus the grammar structure of the language is so complicated that you really have to know a lot to really make a normal sentence without making mistakes.

"When you used to be able to express yourself as an adult in your own language, or as I can do in English, for instance, it's sometimes hard to switch back to very simple talking, like I am forced to do in Finnish. So a real conversation, when I really wanna tell something, I can't do it in Finnish. But basic things here and there, yes. And I'm starting to understand better. Also here now in Pohjois-Karjala, this county in the northeast of Finland, where the accent is different from [that] in Helsinki. Or the people might not know, there is a difference between spoken Finnish and official Finnish, so the things I learned, what's in my book, no one uses that. So, okay, how does spoken Finnish sound like, and how does it sound in this area and what is the difference. And you can only really get a hint of that when you start to know the language a bit better. And it's nice to notice that that is something that I now notice a bit better."

Speaking to Germany's EMP Rock Invasion at the end of last year, Floor stated about the songwriting process for the next NIGHTWISH album: "I think it's more like it's always been. I don't feel the necessity of me being an active songwriting member, because the music is so good. It's about the songs and the music that goes first and not about my ego wanting to join like that. But if I can participate or add something with my creative input, of course I would love that. Of course, I have creative energy in me that needs to come out one way or another, but that's where REVAMP comes in."