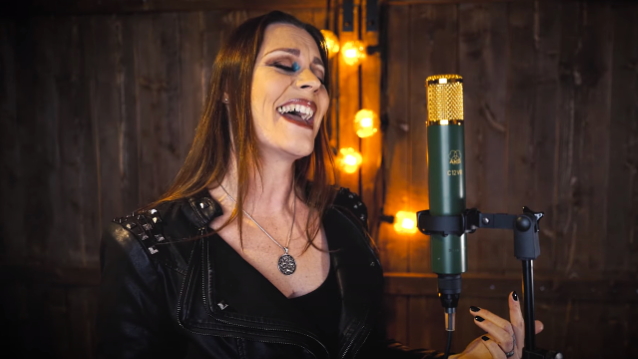 NIGHTWISH's Floor Jansen has released her cover version of the song "Let It Go" from the Disney movie "Frozen". The Dutch-born vocalist revealed that she got the inspiration to record the track through her three-and-a-half-year-old daughter Freja, who has been listening to it and singing it "for months."

In a statement accompanying the YouTube release of her "Let It Go" video, Jansen wrote: "Freja has been listening to singing Let It Go from the Disney movie, Frozen, for months. For fun and also because I miss performing for you, I decided to cover Let It Go from Frozen for all of you! Let It Go has been stuck in my head for months, so now it's your turn. ;) We added a bit of a rock & metal sound to it and gave it a bit of our own twist!"

The music for Floor's version of "Let It Go" was laid down by Oscar Fläring from the band THE FOUXES.

Released in 2013, the original version of "Let It Go" was written by husband-wife songwriter duo Kristen Anderson-Lopez and Robert Lopez. The song peaked at No. 5 on the Billboard Hot 100 chart and won both an Academy Award and Grammy Award in 2014 and 2015, respectively.