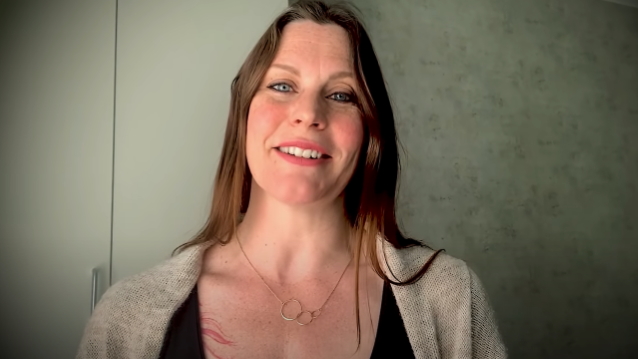 NIGHTWISH's Floor Jansen says that she is "doing so much better," more than two weeks after undergoing gallbladder removal surgery.

The Dutch-born vocalist, who resides in Sweden with her husband, SABATON drummer Hannes Van Dahl, revealed her health scare in a social media post on April 14, saying that she "woke up to severe stomach pains" while in Finland rehearsing for NIGHTWISH's upcoming virtual shows. She ended up in a local hospital where "got what you call a gallstone attack. Turned out I had pains because of a huge amount of gallstones, and pancreatitis. I needed my gallbladder removed but because of the pancreatitis they couldn't do it at once. The day after they took a scarred gallbladder out, with 15 stones in it!"

On Friday (April 23),Jansen posted a video update in which she said that she was "doing so much better, recovering really well from the surgery and getting new energy every day."

As for NIGHTWISH's virtual concerts, she said: "I've been getting, of course, a little insight looks on how it's gonna be, and it's something else. So I hope to see you there, at least, in this virtual world that we're creating."