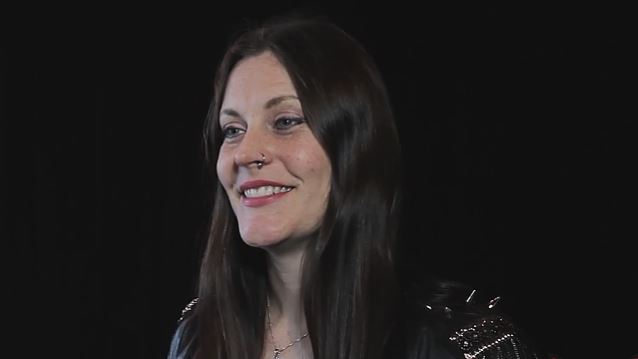 Yell! Magazine conducted an interview with NIGHTWISH singer Floor Jansen when the band played in Montreal, Quebec, Canada on February 21. You can now watch the chat below.

Asked what keeps her up at night, Jansen said: "Oh, cheese and red wine. [Laughs] Yeah, that will keep me out of bed anyway, or I will get back out of bed. But, on a more serious level, some of the things that are happening right now with the refugees in Europe, people fleeing from Syria, Afghanistan, all those countries where things are just going so terribly wrong, and the whole world falling over it with no proper solution. Things going wrong in countries where the refugees actually come to, things that they do to the locals doesn't make things easier. And there's so much tension all around that… yeah, that would keep me up."

Jansen also revealed that the terrorist attacks in France last November had a strong impact on NIGHTWISH, as they did on all other artists who spend a significant portion of their time on the road. "We were on tour when the attack in Paris happened, a shooting in a venue where people were killed during a live concert," she said. "A lot of mainly, actually, American bands canceled tours. People were afraid to come to venues, of course. Threats all over Europe spread like wildfire. People got afraid, which is exactly what [the terrorists] were hoping for, of course, and exactly what we didn't want to give in to. But, of course, when you climb on stage the next day after something like that, it's very real, it's very in your face. Security everywhere, bomb dogs going through the venue twice a day every day. It's very intimidating, and that made an impression on all of us. But [it] also [made us more determined] to really say, 'We're not gonna be intimidated by a small group of people,' 'cause it's still a small group of extremists, who, apparently, are so unorganized, they can't do anything bigger than this. I'm happy for that, but it's also not bigger than that, so let us not get too crazy about this. But still, of course, yes, it's in your daily life then all of a sudden."

She added: "Yeah, I hope these things will get easier again, that people find a little bigger piece in their heart to be a bit more open-minded and not believe everything the media and the politicians are telling us, because we are just getting more and more afraid by things that are being pulled out of perspective, really. So, yeah, it's a weird, weird moment in life, but I really hope for everybody that things will become a bit easier."

NIGHTWISH's 26-date headlining tour of North America launched in Sayreville, New Jersey on February 19, and is hitting six Canadian cities plus Pittsburgh, Anaheim, and New Orleans, then closing out in Tampa, Florida on March 23. Support on the tour is coming from Dutch symphonic metallers DELAIN.

NIGHTWISH recently released a strictly limited (no reprints!) special tour edition of its current album, "Endless Forms Most Beautiful". The tour edition comes with a bonus DVD of live performances, documentary footage and promo videos as well as a huge photo gallery.