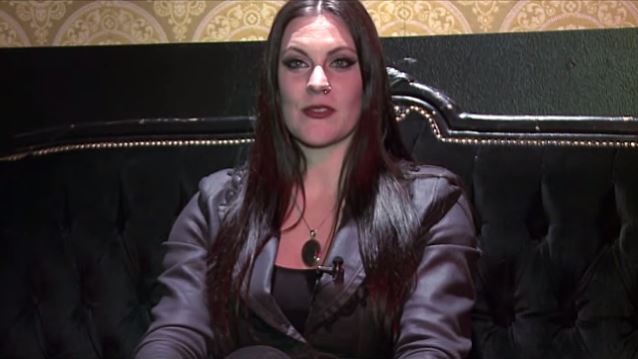 NIGHTWISH singer Floor Jansen says that the leak of the band's new single, "Élan", a week before its official release was a "criminal" act that came close to destroying the group's "very well thought-out campaign" for NIGHTWISH's new album, "Endless Forms Most Beautiful".

Asked by Metal Blast if she sees the issue of leaks as something that's pretty much inevitable nowadays, Floor said: "No, absolutely not. That would be like saying that this is just 'things that happen' in the modern world. I don't think it's normal or that it should be accepted at any level. It's a criminal activity and it destroys a very-well-thought-out campaign, the anticipation that a lot of fans are having, and then it just comes too early, in a bad quality, and with nothing but negative energy around it. There is nothing good about that, and it's not something that should be normal, or that should be considered normal at all."

Floor went on to say that she was extremely ticked off when she found out "Élan" was prematurely made available online for fans to listen to. She explained: "I was really, really furious, and even more so when people started asking me why I was so angry since it's something that usually happens, and that I should be happy that it 'only' happened a week before the planned release of the single, and that it wasn't the entire album. Happy? Really? I can't see it that way at all. [Laughs]"

She continued: "It's not just about our egos, or about our campaign getting destroyed, it's also about the fans that had been waiting for the release, and who didn't want any negative energy around it, and yet that was the first thing that came out. For a true fan, it isn't nice; the whole magic of it is taken away. That magic is something that we highly value with NIGHTWISH."

Jansen added: "We don't make all of those expensive trailers, and build up the expectations about the release, just so that some idiot can put it out online before we get to do it. That whole thing could just result in us saying that we're not even going to bother with it. Why should we bother making a super, high-quality, expensive album, if nobody is going to pay for it anyway, and will just download it for free as an MP3 that has no depth whatsoever because of the small file size.

"We really want to keep bringing high-quality, well thought-out stuff to the table, when we choose to release it, and anybody that tries to get in our way is a criminal. This is why we're not sending out the [new] album [to journalists], and we have listening sessions [for the press instead]. It's an unfortunate situation, because then you can listen to it only once; but we don't want to send it to anybody because the inevitable then happens."

"Endless Forms Most Beautiful" will be made available on March 27 in Europe and March 31 in the U.S. via Nuclear Blast.

The "Élan" four-track single features the album version of the title cut, a radio edit and an alternate version of "Élan", as well as the non-album bonus track "Sagan".