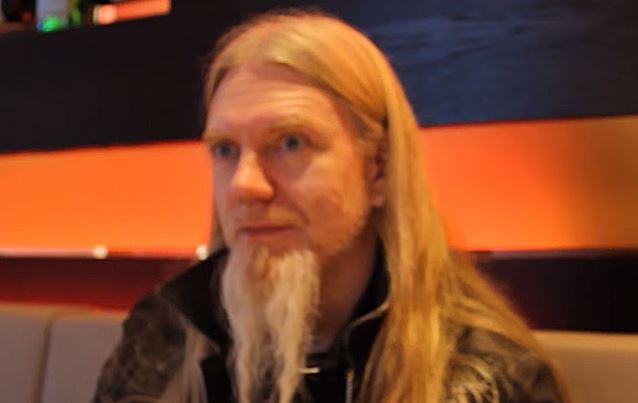 Metal Exposure TV conducted an interview with NIGHTWISH bassist/vocalist Marco Hietala on February 12 in Amsterdam, The Netherlands. You can now watch the chat below.

Asked if he was involved in the songwriting process for NIGHTWISH's new full-length album, "Endless Forms Most Beautiful", Marco responded: "I did have something to do with it. There are quite a few songs where there's some music from me. This time even a few lyrical lines also. But it was in no way purposeful from me. I just had a bunch of demos I recorded in my home studio and in order to sing something over them, I had written some lyrics. And some of them I actually ended up writing pretty seriously. And when I brought the CD to Tuomas [Holopainen, keyboards] if he wants to see if there's anything to fit the album, he also saw some of the lyrics and said, 'I was just trying to write about these things and then you nailed it with these. Could we use these?' [And I said], 'If you think it's okay, then it's totally okay for me.' Yeah. Yeah. Let's put them in.' So that is how it came to be. A couple of pieces, I'm also the lyrical co-writer. This is what it is to collaborate between different people and bandmates. You actually complement each other as well, which is just a great way of doing things."

Speaking about how the main differences between the songwriting process for "Endless Forms Most Beautiful" and the albums that were recorded with NIGHTWISH's previous singers, Tarja Turunen and Anette Olzon, Marco said: "The main difference was, of course, that with Tarja and Anette, we actually rehearsed almost all the music on the album by ourselves, guys, recording the tracks and I was singing over some of them, and they kind of came in later to complement the work with the vocals and all that. And this time around, we really had the time to take the whole group in and build it in that way. And then we also did this for the first time, that we didn't do any kind of demos after rehearsing. We went straight on to the album recordings, and that, to my opinion, managed to transfer this organic band vibe very well onto the album, better than we've ever done before."

"Endless Forms Most Beautiful" was made available on March 27 in Europe and March 31 in the U.S. via Nuclear Blast.