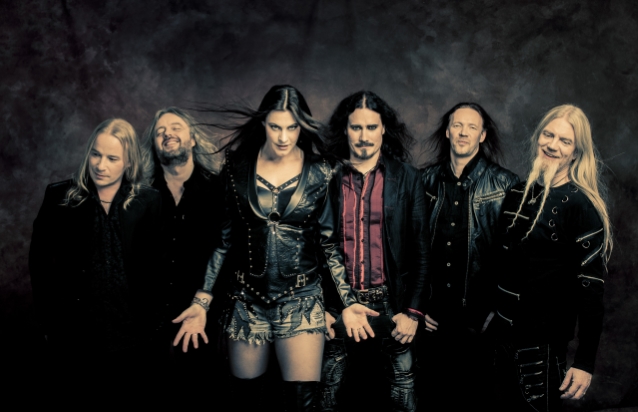 Rock Hard Slovakia conducted an interview with NIGHTWISH keyboardist Tuomas Holopainen prior to the band's November 13 concert at Incheba Expo Arena in Bratislava, Slovakia. You can watch the entire chat below. A few excerpts follow (transcribed by BLABBERMOUTH.NET).

Tuomas: "I think nostalgic is the perfect word. It puts a big smile on my face. I have to give a lot of credit to Floor [Jansen, vocals], Marco [Hietala, bass/vocals] and [multi-instrumentalist] Troy [Donockley] that they're actually able to sing some of the lyrics with a straight face. I think a song called 'Elvenpath' might be the obvious example. It's all about taking a ride with a witch and a broomstick and warming up the sauna. I remember the kid who wrote that song back in the day. Yeah, in certain ways, I miss those days, because it was all new, it was all so innocent and pure. But then again, looking at where we are now, I'm really happy. The main philosophy of the band, why we do this, that hasn't changed a bit. It really hasn't. We do music for the exact same reasons."

Tuomas: "It's quite spectacular, actually, after 22 years of existence, that we're still here, able to bring out the music. The quality is still there and the fans have been so loyal and still are, showing up in larger masses than before. That's something that I really cherish. I think that's a huge privilege and a big thank-you to the fans for sticking around. It hasn't always been easy — everybody knows the story — but still here we are."

On preparing for the "Decades" world tour:

Tuomas: "[There was] a lot of rehearsing. I think we had two, three-week sessions, just rehearsing the old songs, because we didn't really remember how they went. Floor had never sung them before. It was a completely different thing for Troy, so it took a lot of rehearsing. And we also wanted to update those songs a little bit. That's why we went to Budapest to record some orchestras, some new backing tracks for them. But then again, it was really important not to completely re-arrange everything, because the songs will be performed only this once, so they should pay respect to the original. But, of course, you want to update them to 2018, so that you feel comfortable playing them. So that took quite a bit of thinking. And then there was the live show with the pyro and especially the screens. We put a lot of effort and detail into the screens."

On the status of NIGHTWISH's next studio album:

Tuomas: "I'm finishing the composing process. All the songs are more or less done now. They are written. I'm still adding some lyrics. But that's probably the thing for the first half of [2019]. I'm just gonna pile it all together, arrange them the best that I can on my own. And then, in May, I'm gonna do a demo for the guys and girl in the band to listen to. And then we'll have the traditional NIGHTWISH summer camp in early July. We're gonna spend there three months rehearsing, arranging and recording the whole album. So, if the schedules keep, we hope to have a new album by the turn of the year — beginning of 2020; something like that."

On reflecting on the themes found on 2015's "Endless Forms Most Beautiful":

Tuomas: "Basically, it's about the magic of reality, the privilege of being alive on this planet for a few decades. It's about the beauty of science and the natural world, natural wonders. People like Richard Dawkins or Neil deGrasse Tyson, Carl Sagan, Charles Darwin were a major inspiration. The title of the album comes from the original speeches of Charles Darwin: 'Endless forms most beautiful and most wonderful have been, and are being, evolved.' The amount of Dawkins and Darwin books that we have signed for the past few years has been amazing. So it has clearly made an impact, which is wonderful."

On whether he had to sell the concept of "Endless Forms Most Beautiful" to the rest of the band:

Tuomas: "I knew that all the other members in the band, they have a similar way of thinking about life, about science, about reality, so it really struck them hard as well in a positive way. Because, previously, many of the songs are so personal for me. [They were] a bit more on the fantastical side that some people may not have been able to relate to those lyrics quite as closely. But this time, it was like 'all in.' And we discussed the themes and the lyrics a lot already in the songwriting and the rehearsing process. And that really brought us all closer together."

On whether he sees NIGHTWISH venturing into new territories:

Tuomas: "I honestly don't know. We just have to wait and see, in a very clichéd way. As long as we have the spark in us to do music, get creative, make good albums and have the passion to play them live as well, that's pretty much all we can think at this point."

On what his ultimate "wish" for NIGHTWISH would be:

Tuomas: "Consistency would be really nice. I couldn't take another member leaving the band anymore. So I hope that this is gonna be the lineup until the very end. I also think that the touring schedule in the future is not gonna be quite so busy as it has been in the past two decades… To keep the whole thing interesting for the band and also for the people. You don't wanna be there all the time, be active all the time and tour everywhere all the time. You have to look at the big picture as well. If you want this band to still be around in 2030, you have to keep the spark. When you were 20 years old, it was, like, 'Give it all now. Let's do everything. I don't care.' But after all this time, you have to give it some more consideration."

NIGHTWISH's next studio album will mark the band's second full-length release with Jansen, who has been touring with the group since 2012.