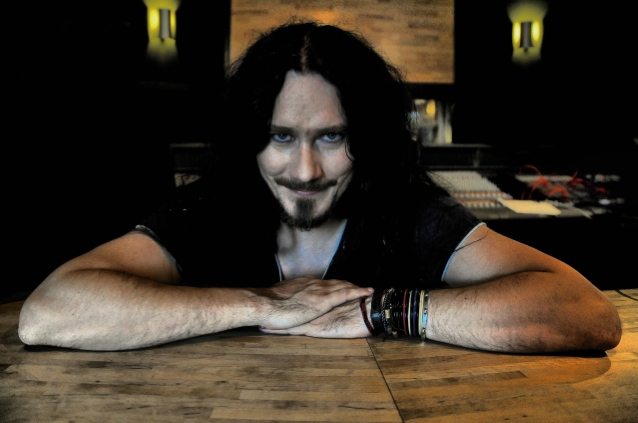 Serena Solomon of Nordic Metal conducted an interview with NIGHTWISH keyboardist Tuomas Holopainen prior to the band's December 14 concert at Gatorade Center in Turku, Finland, as part of their career-spanning "Decades" tour. You can listen to the entire chat below. A few excerpts follow (transcribed by BLABBERMOUTH.NET).

On how the "Decades" concept differs from previous NIGHTWISH album tours:

Tuomas: "It is [different] to an extent, yeah, because every night, it's time travel. The songs that we play that are not the songs of NIGHTWISH of 2018, you go back in time 15, 20 years and every night you play songs like 'The Carpenter' or 'Elvenpath', 'Sacrament Of Wilderness', [from] the real old days, [and] you get a nice little real memory trip. [Laughs] So, it is different in that sense, yeah."

On whether playing older NIGHTWISH songs brings up certain memories or emotions for him:

Tuomas: "It's a weird feeling. You kind of remember the person who wrote those songs, you remember the band who played them back in the day, but we would never do those songs or lyrics in 2018 anymore. So you can definitely see the evolution of the band playing those songs. And we were really careful picking which songs to play live, so that we would still enjoy them. There were a few songs that were a definite no-no. [They were] a bit too goofy, so to say. But I have to give a lot of respect and kudos to the singers that they are able to perform some of those songs with a straight face every night. [Laughs]"

On whether revisiting old songs has helped him write new material:

Tuomas: "I don't think it has anything to do with it. I've been doing new songs the whole year, and they have come out really nicely. I'm feeling really excited about them. But I don't think this particular tour has anything to do with it. This is a like a nice little additional bonus. My main focus has been on the next album for the past year… It's all done. [The band hasn't heard] nothing. I still need to twiddle with them and arrange them and make them better before I dare to show them to the other members of the band."

On the strangest or most interesting place he's found inspiration to write new music:

Tuomas: "The actual inspiration can come anywhere — that's the funny thing. It can come in the backstage of a venue, at home, while traveling, while asleep. I mean, I have this old-fashioned Dictaphone that I still hum and play all of my ideas, and it's full of really, really weird shit. Because I wake up in the middle of the night, at three o'clock, and I have this really good melody. [Sings melody] Then, in the morning, I'll listen to it and be, like, 'What?' It happens all the time. But some of it is actually usable too."

On whether there are any new things he'd like to try with NIGHTWISH:

On his thoughts on the Finnish metal scene:

Tuomas: "I really adore it. I think we have dozens of really, really good metal bands that I'm actually a fan of. I have been before I even started NIGHTWISH. I was a huge fan of AMORPHIS, for example, and STRATOVARIUS, and I love bands like SONATA ARCTICA and CHILDREN OF BODOM. I think it's really rich, it's very varied and a bit loony as well. That's quintessential for Finnish metal, that there's quite often an idea, like HIM with the 'love metal', AMORPHIS with Kalevala, APOCALYPTICA doing metal with four cellos, we have FINNTROLL who sing in Swedish — all these crazy ideas that really work."

On the bands who have "saved his life" or heavily inspired him:

Tuomas: "I don't know if it saved my life, but helped immensely. There are so many. VANGELIS. James Newton Howard. James Horner. METALLICA changed my life in many ways. I don't think I would be here without METALLICA. And THE THIRD AND THE MORTAL, the Norwegian band, and their album 'Tears Laid In Earth'. It kind of showed me the way of what I wanted to do with music. Atmospheric metal, beautiful, really dark, with a female singer. 'Wow! I want to do something similar!' So, I owe them a lot, but maybe it's an exaggeration to say that I owe them my life. [It] changed [my life], for sure."

NIGHTWISH's next studio album will mark the band's second full-length release with singer Floor Jansen, who has been touring with the group since 2012.

The band has spent the last few months on the road in support of its recently released "Decades" compilation.