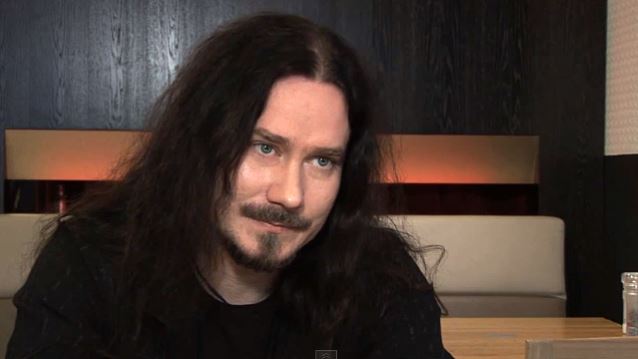 NIGHTWISH's TUOMAS HOLOPAINEN: 'I Truly Think That This Whole Band Could Use A Little Break Now'

NIGHTWISH keyboardist and main songwriter Tuomas Holopainen spoke to the Nighthearts Ukrainian NIGHTWISH fan club about the band's decision to take a year-long break during 2017 and return to activity the following year.

"Staying at home is the part I am looking forward to the most, I have to be honest," he said (see video below). "I really am. I'm already kind of excited about the idea of being able to be at home for about a year. But also I made some travel plans here and there. And [I will] have the chance to fully concentrate on the green house and the gardening and taking care of the horse and all that lovely, earthy stuff, so to say. And I have no plans that involve music in any way, but if it comes, then it comes."

He continued: "I truly think that this whole band could use a little break now. We've been going on for about twenty years non-stop, and I think that's good for everybody. And on a personal level, the last album, 'Endless Forms Most Beautiful', was the pinnacle; it truly was for me personally, like, 'This is really the best that I could have ever done.' And I'm really proud of the album. [I'm] really proud of the band, especially the last song on the album. So I thoroughly felt that now it's time to take a break. I've been using this term before, but I really feel well fed, so to say, internally, spiritually and musically. It's gonna take some time to find some new stories to tell in an interesting way again. And I think this year [off] will hopefully make it happen."

Singer Floor Jansen, who made her live debut with NIGHTWISH in 2012 but didn't officially join the band until the following year, recently shot down speculation that NIGHTWISH's upcoming break has something to do with tension between members of the group. She told AXS: "Even though we will have this year off, it doesn't have anything to do with how things are in the band. I've seen some people starting to gossip online of why we [would] take a year off. We'll take a year off because we can and because we want to. That's all there is to it. It has nothing to do with how things are in the band. And it also doesn't mean that we haven't been thinking about what's coming next; we have a lot of cool stuff coming up. So we hope that, after this break, people will still be equally excited to come out and see whatever we've got cooking up in our kitchen for them."

NIGHTWISH's most recent headlining tour of North America launched on February 19 in Sayreville, New Jersey and closed out in Tampa, Florida on March 23. Support on the tour came from Dutch symphonic metallers DELAIN and Finnish melodic metallers SONATA ARCTICA.