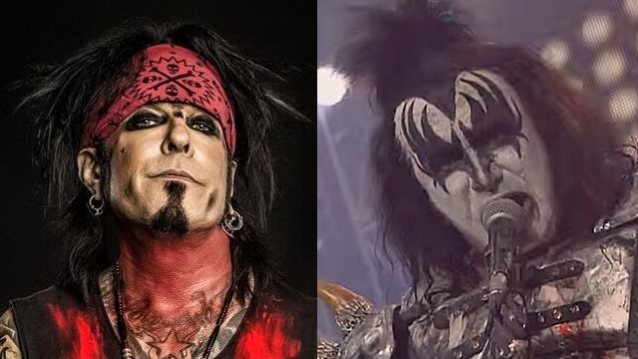 NIKKI SIXX: GENE SIMMONS Is An 'Overrated, Lucky Guy That Dresses Like A Clown'

Nikki Sixx has called Gene Simmons an "overrated, lucky guy that dresses like a clown" after the KISS co-founder made callous statements about the death of Prince.

This past week, Simmons received backlash from friends, family and fans after insinuating that Prince died from a drug overdose. The MÖTLEY CRÜE and SIXX:A.M. bassist also ripped Simmons on Twitter, saying his "recent heartless and uneducated remarks about Prince's death shows why he's not my hero anymore or anybody's."

Sixx took to the airwaves on his nationally syndicated radio show "Sixx Sense" to elaborate on his criticism of Simmons. He said (hear audio below): "Nothing that Gene Simmons says resonates with me. When you're in Gene's position, you should have a little bit more than a narrow-minded, bullying sense of what's happening on the earth. And he said that if you're depressed, kill yourself. He is pro Trump, he is pro a lot of things that I think are negative."

He continued: "I think that [Gene] is [an] overrated, lucky guy that dresses like a clown. [He] wrote some good songs, [but] hasn't in a long time, and loves to brag about himself.

"Gene Simmons, you're no longer my hero."

Simmons on Wednesday took to Twitter to clarify his remarks about Prince. He explained: "I apologize — I have a long history of getting very angry at what drugs do to the families/friends of the addicts. I get angry at drug users because of my experience being around them coming up in the rock scene."

Prince died on April 21 at his home in Minnesota, but no cause of death has been identified just yet. A law enforcement official told the Associated Press that his death was being investigated as a possible drug overdose.

MÖTLEY CRÜE and KISS co-headlined a North American tour in the summer of 2012.