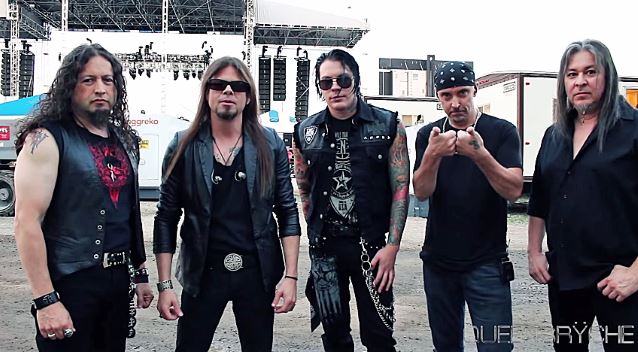 Levi Seth of Australia's Sticks For Stones recently conducted an interview with QUEENSRŸCHE guitarist Michael Wilton. You can now listen to the chat below. A couple of excerpts follow (transcribed by BLABBERMOUTH.NET).

On how QUEENSRŸCHE fans have been responding to the band's singer of the past four years, Todd La Torre:

Michael: "He's seamlessly integrated [into the band], the fans love him. He's the real deal. There's no prima donna ego on stage. It's not an act; it's all real. And as far as the albums [go], people are just blown away by [2015's] 'Condition Hüman' and his performance on it. And then live, as we expect, we have to prove ourselves with every show, and that's what we're doing. Because we're getting people that haven't seen us in a long time, or are wondering what happened, or they've had their head in the sand or something. Their jaws are dropping [after seeing us live now]. It's unbelievable, after a show, how many new fans we get, and it's just unbelievable how it's just a viral situation right now. So it's really great that we get to bring this version of QUEENSRŸCHE, a high-energy [version]… like the good old days, to Australia."

On whether he is seeing a lot of new fans and young faces coming to see QUEENSRŸCHE nowadays:

Michael: "Yeah, I mean, since we have Todd La Torre and Parker Lundgren [guitar], we have a whole contingency of new fans, and by new fans I mean youg fans as well, that are coming to the shows now that only know us from our past two albums. So it's obviously something that we want to happen, but, you know, of course, we get the people that have been there since 1982 as well. People who are coming out to support the band and see the band are just amazed that we're doing the songs like [we were doing them] when they were young [and they first saw us play]. So it's really interesting right now that you see that a QUEENSRŸCHE is so varied in the audience."

On whether the members of QUEENSRŸCHE immediately get back to writing new music once they have completed a tour:

Michael: "Well, we started [touring in support of 'Condition Hüman'] in January and we are going to December. The album's been out six months. Generally, the record company wants a new album every year and a half to two years. So, in January, we're gonna start writing a new record, and we do that in Seattle, where we live, so we get to be home. Keeping the family bond strong is always just as important. But, yeah, we're busy guys; I've gotta say that. I mean, we're out there with everybody else, and it's a lot of work, it's a lot of fun, and it's very rewarding to see everything happening the way it is for us."