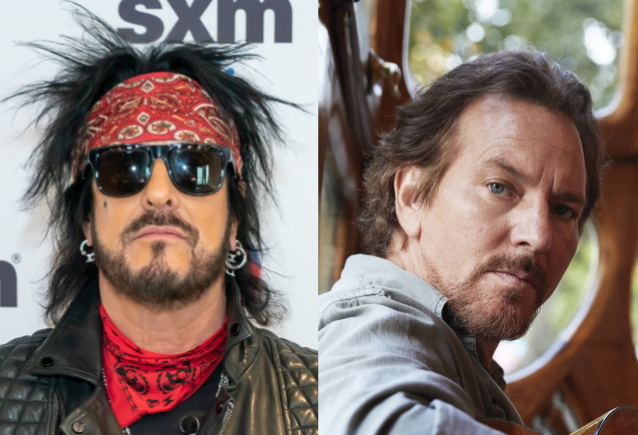 MÖTLEY CRÜE's Nikki Sixx says that he doesn't understand why PEARL JAM's Eddie Vedder felt it necessary to "take a swipe" at his band.

A month and a half ago, Eddie gave an in-depth interview to The New York Times to promote his recently released solo album and he discussed a variety of topics, including what "ripples" of change he believes the Generation X / alternative rock culture of the early '90s may have been responsible for.

A few days after Vedder's interview was published, Sixx took to his Twitter to respond to Eddie's comments, writing: "Made me laugh today reading how much the singer in PEARL JAM hated @MotleyCrue. Now considering that they're one of the most boring bands in history it's kind of a compliment isn't it?"

Nikki elaborated on his PEARL JAM comments during a recent interview with Brazilian entrepreneur Paulo Baron and music critic Regis Tadeu. In a chat that was recorded on February 25, Sixx initially broached the subject while discussing how he has evolved as a songwriter since MÖTLEY CRÜE's inception more than 40 years ago. He said (as transcribed by BLABBERMOUTH.NET): "I'm not trying to be the guy that wrote [the CRÜE song] 'Bastard' [from 1983's 'Shout At The Devil' album], 'cause I'm not the guy that wrote 'Bastard'. I wrote that song about somebody that ripped us off. I am the guy that if you fuck with me, I will fuck with you back. And that's what that song is about. You take a swipe at my band; I'll take a swipe at your band. You try to hurt my family, which is my band; I will try to hurt you. That's not something to be proud about. [Laughs]"

Asked specifically about his PEARL JAM criticism and why he felt compelled to respond to Vedder's comments, Nikki said: "I remember going to MTV with [a copy of] 'Nevermind' before it had come out, NIRVANA. Me and Tommy [Lee, CRÜE drummer] were on there. We were, like, 'Hey, you guys gotta check out this band. You gotta check out this band.' And they were bands that were coming. I remember having a cassette — I think it was demos; it might not have been; it might have been early recordings — for RAGE AGAINST THE MACHINE, and I remember telling everybody about that.

"We've never been afraid to embrace music changing because that's the whole idea behind music," he continued. "If you listen to 'Too Fast For Love' and then you listen to 'The Dirt', you're, like, 'Well, it's the same band, but it has grown.' So we never had a problem with that.

"My only thing is, you wanna take a crack at my band, I'm probably gonna say something back. But what I don't understand is why's the guy even talking about my band? He's a successful guy.

"Listen, let's face it: the guy flies around in private jets; he lives in a mansion in a gated community; he sells out stadiums; and then he dresses at the thrift store and tries to pretend some guy in the '90s. Don't take a swipe at my band, dude. I mean, I'm at least being honest."