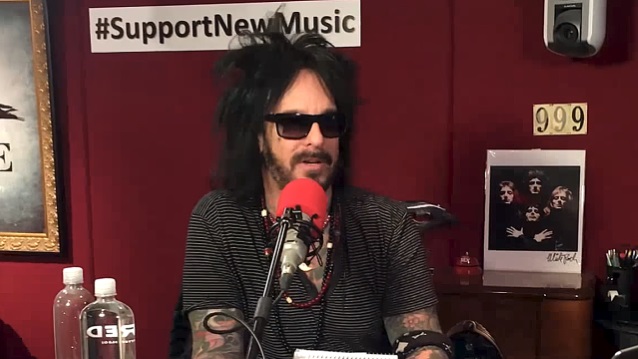 Said the "Sixx Sense With Nikki Sixx" producers: "When 'Sixx Sense' began, it was our mission to not only entertain you but to make you think, cry and, yes, on occasion, cringe. Thank you for taking this journey with us, and allowing us to be part of your life."

Launched at the beginning of 2010, his flagship radio program "Sixx Sense" quickly became the biggest syndicated rock show in America, distributed to more than a hundred and thirty stations nationwide and boasting nearly three million global weekly listeners. Sixx has welcomed an influential array of prominent musicians, celebrities, and noteworthy personalities as guests on the show. During his tenure as host he interviewed royalty such as Sir Paul McCartney, Slash, Steven Tyler, METALLICA, Stevie Nicks and Dolly Parton, boxing champion Mike Tyson, director Cameron Crowe, celebrity health expert Dr. Oz, and many more. In addition, the program provided a unique platform for new music discovery with Sixx hand-selecting up-and-coming talent and introducing his audience to future superstars. Sixx launched trailblazing artists such as AWOLNATION, GRETA VAN FLEET and NOTHING MORE, among many more, by debuting their music on "Sixx Sense".

Julie Talbott, president of Premiere Networks, stated: "When we first partnered with Nikki in 2010, we set out to create a unique program from the perspective of true rock star, and that's exactly what we did. We're proud of the work we did together to make 'Sixx Sense' one of the most widely syndicated rock radio programs in the country while establishing the ultimate platforms for rock music fans, as well as new and established artists. It's been a pleasure working with Nikki, and we wish him all the best."

"I grew up discovering music on the radio," explained Sixx. "So to host my own show over the nearly eight years of 'Sixx Sense' was beyond my wildest dreams. I could not have done it without my amazing team in the studio, or the guests, musicians, and listeners that brought the show to life. It's been an inspirational journey and I'll always be a fan of the medium, but it's time to shift gears outside the realm of solely radio. I'm in the process of developing new and unique programming and ventures across multiple platforms. But I'm really gonna miss 'Sixx Sense'."

Sixx is stepping down from his hosting duties to focus on myriad new endeavors in 2018, including his blossoming photography career, television endeavors and the Broadway adaptation of his New York Times bestselling memoir "The Heroin Diaries: A Year In The Life Of A Shattered Rockstar".

Featuring music from SIXX:A.M.'s "The Heroin Diaries Soundtrack", the first-ever soundtrack tied to a book release, Sixx has teamed up with former Live Nation chairman and "Spiderman: Turn Off The Dark Broadway" producer Michael Cohl to bring this compelling story of addiction and redemption to life on stage.

Originally released in 2007, both the book and soundtrack saw 10th-anniversary editions released in October: "The Heroin Diaries: A Year In The Life Of A Shattered Rockstar" featuring new chapters and never-before-seen photographs, came out October 24 via Gallery Books/Simon & Schuster. "The Heroin Diaries Soundtrack: 10th Anniversary Edition" by SIXX:A.M., featuring three newly reimagined 2017 tracks, including No. 1 hit "Life Is Beautiful 2017", was released on October 27 via Eleven Seven Music.

2018 will also see Sixx take his first-ever photo exhibition "Conversations With Angels" around the world in partnership with Leica Camera. The collection showcases the artist's talent for storytelling across platforms with intimate images by Sixx depicting homelessness and drug addiction amongst other subjects; topics that he was all too familiar with before photography helped change his life. Sixx has also partnered with Leica Camera on the debut of a limited-edition Nikki Sixx Leica Q camera.

In addition to his own creative endeavors, the visionary artist remains committed to broadening horizons for all. Sixx recently penned a powerful op-ed for the Los Angeles Times arguing for better policies to end the scourge of opioid addiction in America. He has also joined Canadian talent show "The Launch" where he is mentoring unsigned talent alongside Boy George, Shania Twain, Fergie, Alessia Cara, Julia Michaels and Jennifer Nettles as an expert in crafting a hit song on the new six-part series.