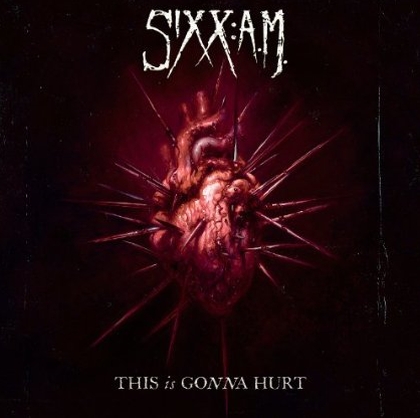 A short teaser clip for MÖTLEY CRÜE/SIXX: A.M. bassist Nikki Sixx's new book, "This Is Gonna Hurt: Music, Photography And Life Through The Distorted Lens Of Nikki Sixx", can be viewed below. The title is tentatively due on April 26, 2011 via the HarperCollins imprint William Morrow.

"This Is Gonna Hurt" is part photo, part journal — but all Nikki Sixx. It is a collection of compelling snapshots and stories that capture the rage, love, optimism, darkness, and determination that shape his work. Told with the raw authenticity that defined his New York Times bestseller "The Heroin Diaries", "This Is Gonna Hurt" chronicles Sixx's experience, from his early years filled with toxic waste to his success with MÖTLEY CRÜE, his death from an OD and rebirth to his addictions to music, photography, and love.

In the ARTISTdirect.com interview, Sixx stated about "This Is Gonna Hurt", "We're working on the book right now. It's 99 percent finished. It's exciting for me because it's probably got about 150 of my photographs in it as well, so you start to see the tie-in between who I was as a kid and who I am as an adult and then what happened in that journey and how this fucked up brain of mine works."

The New York Times bestselling author of "The Heroin Dairies", Sixx refuses to become a sanitized PSA for suburban mothers; instead, he has found strength and inspiration in his pain and sobriety, and in this raw and powerful book gives us a glimpse inside his sick and dirty mind.

"I've always had an eye for the oddities in life," said Sixx. "Even as a kid I saw the world in my own way and thought most things that were different were beautiful and magical. Even things that other people thought were horrifying and disgusting and weird. . . . People say I have a distorted lens. I think I see things as they really are."

Love story, bad-ass rock tell-all, social commentary, family memoir, "This Is Gonna Hurt" offers the compelling insights of an artist and a man struggling to survive, connect, and find a happy ending — a search that fuels Sixx's being. "I want to take you on the journey I am on, in real time," Sixx writes. "If you don't deal with your demons, they will deal with you, and it's gonna hurt."

Following the success of "The Heroin Diaries", Sixx's new band SIXX: A.M., is recording an album to be released in conjunction with "This Is Gonna Hurt". Some of the songs were inspired by the author's photographs; others inspired photographs of their own.

"This Is Gonna Hurt" will include more than two dozen of Nikki's images. He will incorporate the stories behind the pictures and how they came to be, including interviews with the subjects so readers can see "what life is like for those whom society has labeled as freaks."