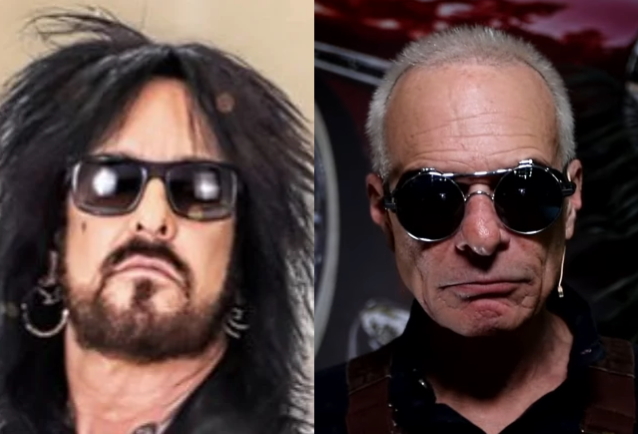 Nikki Sixx says that he "understands" why David Lee Roth turned down an offer to take part in that MÖTLEY CRÜE's "The Stadium Tour".

In an article previewing Sixx's just-released book, "The First 21: How I Became Nikki Sixx", the Los Angeles Times revealed that when CRÜE invited Diamond Dave to share the bill with them on their highly anticipated reunion tour, the VAN HALEN singer responded, "I don't open for bands that I influenced."

Nikki discussed Roth's decision to decline CRÜE's invitation in a new interview with Forbes. He said: "Yeah, well, he probably influenced everybody. That band [VAN HALEN] is a monster. But, you know, understandably. We all get to make our choices and stuff. I just thought with the body of work that he has with a lot of people, it could be really exciting. I understand his position, too."

Sixx also once again took issue with how Roth's remarks were covered by the media, saying: "It's interesting for me now, when I do press, I'm really aware that a lot of press outlets are looking for clickbait. And what I like about 'The First 21' is I don't really feel like there's a lot of clickbait in there. Maybe that's a bad thing because, you know, you click on the link and someone gets five cents in advertising. I don't want to sell advertising. I want to sell an experience of what these first 21 years are about. So I tried to be very honest, and 'this is kind of how it is,' but no [cheap] shots."

Sixx previously blasted the press for sensationalizing his revelation that Roth turned down the CRÜE tour, writing on Twitter: "Media takes one sentence outta new book and makes it a headline. Clickbait. I've comes to despise bottom feeder press. Ripping off fans to sell advertisements.."

Back in October 2019, Roth reflected on the influence of VAN HALEN on bands that followed, telling KKLZ's "The Mike & Carla Morning Show": "Hair bands were the imitations of VAN HALEN. Yeah, it is true, and spandex was what they came up with as something visual. I started off in leather, with the same haircut that Bono and [Bruce] Springsteen and the guys in METALLICA had. A famous haircut — if I had that same haircut today, it'd have its own Instagram. But VAN HALEN was a '70s band — we started off in 1972, and our first two albums were in the '70s. We sold our first 10 million records before the '70s were over. We spawned a whole lot of imitators who resorted to gimmickry and trade crap. It's easier to imitate a haircut and a kind of pants and to exhibit bad behavior."

"The Stadium Tour", which also features POISON and JOAN JETT & THE BLACKHEARTS, was originally scheduled to take place last summer but ended up being pushed back to 2021, and then to 2022, due to the coronavirus crisis.

Roth performed as the opening act for the February/March 2020 North American leg of KISS's farewell tour, but is not making any appearances on the rescheduled KISS shows which kicked off on August 18 in Mansfield, Massachusetts.

Earlier this month, the legendary VAN HALEN singer announced that he was ending his career with his Vegas shows during the first weeks of January. "I am throwing in the shoes. I'm retiring," Roth told the Las Vegas Review-Journal. "These are my last five shows."