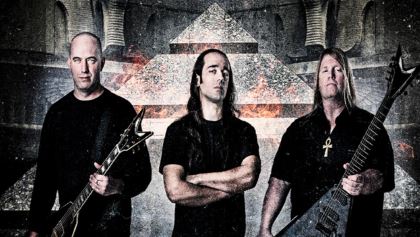 NILE Recording Guitars For Next Album

In a recent interview with Australia's "Rabid Noise" podcast, NILE drummer George Kollias stated about the progress of the songwriting and recording sessions for the band's follow-up to 2012's "At The Gate Of Sethu": "[We'll] release the album around June. And we have a European tour with SUFFOCATION in September/October, and we're talking about a U.S. tour, maybe, [starting in] mid-November."

Asked about a possible title for the new NILE CD, George said: "We're not sure yet, so I can't really tell. But if the one we have right now… I mean, we have a title, but, seriously, it's not the final one. But if that's the final one — I mean, if this is gonna be the title — it's one of our songs which is the most difficult song I've ever played in my life. Like, seriously, it's so hard to play. We were working on this song for three days. This has never happened with NILE — working on one song for three days. It's never happened. It's a song that, if you're a drummer, and you wanna play it, or a guitar player as well, you're gonna have troubles. [Laughs] It's not that long. I think it's around six minutes or something… But it's crazy. Totally crazy."

NILE's seventh full-length album, "At The Gate Of Sethu", sold 3,800 copies in the United States in its first week of release to debut at position No. 131 on The Billboard 200 chart. The CD landed at position No. 2 on the Top New Artist Albums (Heatseekers) chart, which lists the best-selling albums by new and developing artists, defined as those who have never appeared in the Top 100 of The Billboard 200.