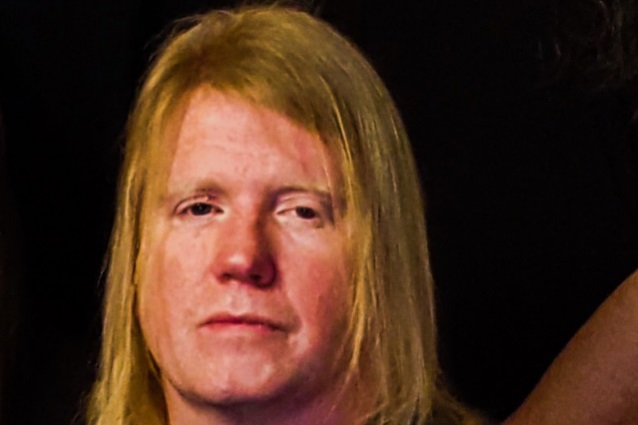 Prior to NILE's performance in Berlin, Germany on March 3, guitarist Karl Sanders was interviewed by Janne Vuorela. The full conversation can be viewed below. A few excerpts follow (as transcribed by BLABBERMOUTH.NET):

On the current state of the band:

Karl: "Things are really good for us. We've been really happy this past year. We've been touring our butts off, and we have a new album in the works that we're really excited about. 2018, it's going to be our year."

On what to expect from the group's forthcoming album:

Karl: "It's going to be NILE music. We're NILE — we're definitely continuing on in the same vein, although we have a new member [vocalist/guitarist Brian Kingsland], so he's bringing some new influences to the table, but it still sounds like NILE. There's no radical departure."

On how the band has successfully navigated lineup changes:

Karl: "It's the music. I believe it's the music and the connection with the fans. That is the persevering eternal essence."

On his interest in Egyptian mythology:

Karl: "It's a lot of fun. When I started researching the lyrics for NILE, I thought to do a really good job with it, it needed to be done right, so there was a lot of research involved. The more that I learned, the more I studied, the more I enjoyed it. I really look forward to the times when I'm working on NILE songs, because it's very enriching, very rewarding."

On the highlights of NILE's career:

Karl: "I'd have to say [playing] Wacken [Open Air festival in Wacken, Germany] in '03. We played right before SLAYER. It was a prime spot, had a great crowd. That was a great one. Taking [Brian] out on tour, that was very rewarding, because you got to kind of see things through his young, inexperienced eyes, and [it] makes you appreciate it in a much different way. I'm happy. When people say, 'Wow, it's, like, the 20-year anniversary of '[Amongst The Catacombs Of] Nephren-Ka', I go, 'Fuck, I've been touring for 20 years? Where'd all the time go?' Then I realize, I spent it playing metal for metal fans. Is there anything better? Probably not. It is what I do for a living. The living of a death metal guitar player is not the same living as, say, Michael Jackson. It's not the same thing, but there is a happiness level when you're playing your own music, and it's brutal, uncompromising music, no one can tell us what the fuck to do. We're doing what we want to do. There's a certain brutal joy in that. Sometimes, you've got to compromise with your own band mates, but other than that, death metal is a no-compromise kind of music. You tell anybody in any death metal band, 'You've got to do it this way,' it is guaranteed [that] they're going to say, 'Fuck you. Go fuck yourself. We're doing it our way.'"

On how the music industry has changed since NILE was first formed:

Karl: "The entire metal scene has changed completely. When we started, there was no internet, and now it's how we do everything in the modern age. But touring has gotten better, because venues have caught up. The places we play nowadays are much better than the ones when we started. Certainly, the financial rewards are different when you've been playing in a band for 20 years as opposed to just starting out. It's easier to collect our money now. When you're a young band, you may supposed to get paid, but actually collecting your money at the end of the night is a different matter. It's tough on young bands."

On the importance of touring:

Karl: "It's the lifeblood of any band. You must play your music for the people. That's its purpose. If you have no touring, I don't think you can really call it a band."

On the current state of technical death metal:

Karl: "The difference from when I started to now, bands are so ridiculously technical now. You've got nine-year-old Japanese girls that can fucking shred Paul Gilbert. That's a lifelong accomplishment for any guitarist, and now, nine-year-old kids from Japan and Korea can shred like motherfuckers. What does that mean for the rest of the world? It's not just about technique. You've got to make some music, too. Soul, feeling — that's what touches people. People who can shred, technical music, fast guitars, they're more commonplace nowadays. It's less meaningful; it's less special. I think you have to actually have something that connects with people to be heard, for people to even care."

NILE recently announced that it will be working with producer Erik Rutan (MORBID ANGEL, CANNIBAL CORPSE) on its next studio album, which will be released by Nuclear Blast. The effort will mark NILE's first release with Kingsland.

Sanders previously described Kingsland as "a seriously talented extreme metal guitar shredder" with "a great brutal metal voice [and] a very versatile range." He added that "Brian is also a genuine, down-to-earth, hard-working and motivated guy who has helped reignite and re-establish a sense of teamwork back into NILE."