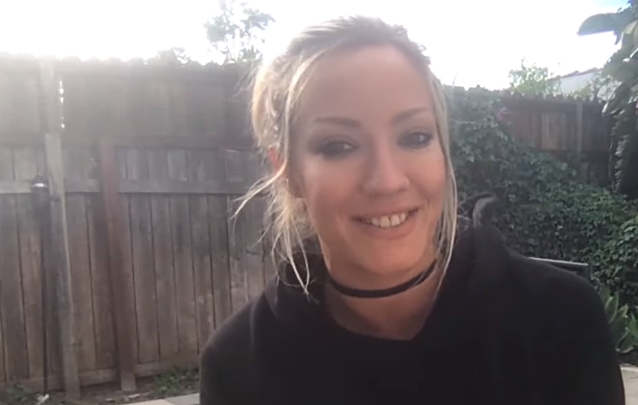 NITA STRAUSS: 'I Haven't Taken A Day Off Since January 3rd'

On April 8, Nita Strauss, the Los Angeles-based guitar shredder for the ALICE COOPER band, took part in an "Ask Anything Chat" where she answered a number of fan-submitted questions.

Asked if she ever gets to relax at home when she is not touring, Nita said: "Not so much relaxing. Here's a little-known fact: I haven't taken a day off since January 3rd. And it's now April 8th. And before that, I didn't take a day off from January until Christmas last year. And that means, even the days that I was home, I was doing interviews and press — stuff very much like this — where technically I'm at home, but I'm still doing work stuff.

"Josh [Villalta], my boyfriend and manager, and I, we run our business basically ourselves — the business is Nita Strauss Incorporated, and it's a full-time job. When it's your own name that is the business, the business never stops. So we're answering e-mails, we're setting up press, we're dealing with different endorsements and appearances, and stuff like that. I just got back from Mexico, from our workshop there, a couple of days ago. I've got a show here in Southern California the day after tomorrow. I've got my guys flying in to be my band and my crew for these shows. So even the time at home is not really time off. It's all about the grind. It's that success mentality — you either do it or you don't do it. And I'm choosing right now to just really keep my head down and focus and try to make these years of my career the best that I can."

Nita's debut solo album, "Controlled Chaos", was released in November via Sumerian Records. She stated about the disc: "From bright and fun to aggressive and dark, from peaceful to chaotic, this album is a way for me to give the listener a glimpse into my personality and what goes on inside my mind."