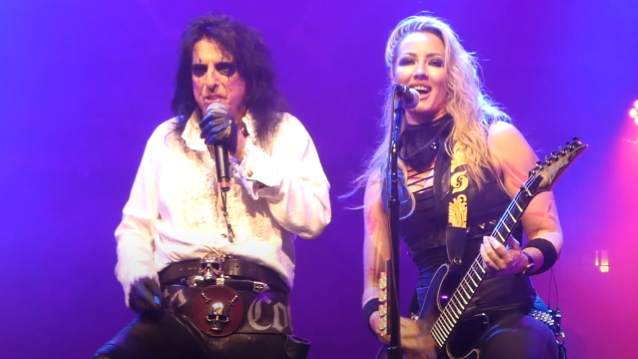 NITA STRAUSS On Upcoming ALICE COOPER Album: 'ALICE Wanted Us To Make A Record That Sounds Like His Band'

Nita Strauss, the Los Angeles-based guitar shredder for the ALICE COOPER band, spoke to Toronto's 94.9 The Rock radio station about what it has been like to work with legendary Canadian producer Bob Ezrin on Alice's upcoming follow-up to last year's "Detroit Stories" album. She said (as transcribed by BLABBERMOUTH.NET): "Bob definitely has his own style of working, his own personality, and as long as you understand that and that rapport, I think Bob is an amazing, amazing person. He's an amazing person to work with regardless, but I definitely think you have to understand his production style and his critique style and understand where he's going with everything in his specific vision. We had a great time making the record."

According to Nita, Bob gave her and her bandmates plenty of room to showcase their own styles during the recording process. "Who are any of us to tell Bob Ezrin how to make an Alice Cooper record?" she said. "He has a vision, he has it how he wants it, and it was our job to come in and execute it. And I think we did that to the very best of our ability and absolutely retained our personalities and our own style. He gave us a ton of freedom to express ourselves. He gave us a lot of notes, of course. I think Alice wanted us to make a record that sounds like his band, sounds like the live band, and I was really grateful that Bob and Alice gave us the opportunity to do exactly that."

Strauss also talked about the experience of sharing the stage with two other guitar players during Alice's live shows.

"I feel fortunate to be in a band with three great guitar players — myself and Ryan [Roxie] and Tommy Henriksen on guitar," she said. "And I feel like those two make me better every single day. I think Ryan is the best guitar player in the band. Tommy is by far the best musician and songwriter in the band; he writes a ton of the Alice stuff, even before this last record. So I just learn so much from both of them each and every time we step on stage together, and they've both made me a much better guitar player and a much better musician."

Last month, Alice revealed during an appearance on an episode of SiriusXM's "Trunk Nation With Eddie Trunk" that he is working on two albums right now. "All I can say is that one is written — totally written — and we'll be doing bed tracks for that one pretty soon," he said. "And then the other one is just a touch in the future, but that's being written right now too. They're two entirely different kinds of albums, but they're Alice Cooper pure rock and roll albums. The two albums will really be hard rock albums."

Also last month, Nita told Detroit's WRIF radio station that she and her Cooper bandmates "recorded quite a bit of music" for his upcoming album. "The band did also have a huge part in the writing this time, which is the first time that's happened in the eight years that I've been in the band," she said. "So it was really, really fun — really exciting for us to get to work with a legend like Bob Ezrin. [It was] a huge, huge honor to be in the studio with him and Alice creating what we hope will be some more Alice Cooper music to just add to his legacy."