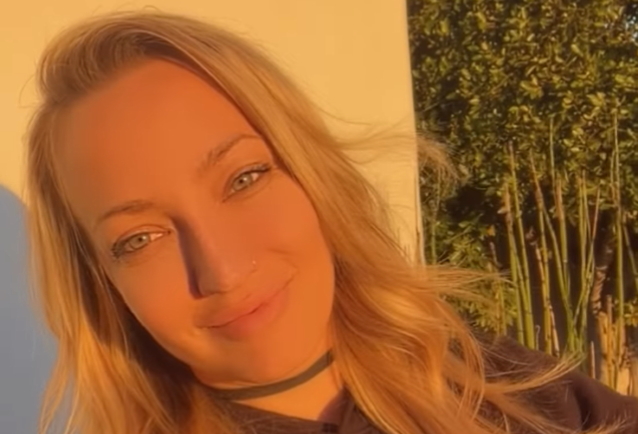 NITA STRAUSS Shares Another Post-Surgery Update, Says She Will Be 'Off Crutches Completely By Friday'

Former Alice Cooper and current Demi Lovato guitarist Nita Strauss has shared another update on her recovery from a recent surgery for a torn meniscus.

On Tuesday (January 24),Nita posted a video message on her Instagram in which she said: "So I had my second post op yesterday and the news is good. I'm off the brace completely. Weaning off the crutches this week. So, two crutches yesterday and today; one crutch tomorrow and the next day; and then off crutches completely by Friday, which is gonna be so nice. My doctor says I'm in the 95th percentile or patients recovering from this surgery, which is very good to hear; it makes my little overachiever heart very happy.

A week ago, Nita launched the "Into The Void" YouTube series in which she promised to take fans behind the scenes of her recovery and the preparation for the release of her second solo album.

Nita's meniscus surgery was overseen by Dr. Michael Banffy, an orthopedic surgeon at Cedars-Sinai in Los Angeles who is also a team doctor for the Los Angeles Rams. The procedure took place seven months after she first sustained the injury while on the road with Cooper.

Strauss, who has been the in-house guitarist for Los Angeles Rams football games since the team moved to SoFi Stadium in 2020, previously discussed her operation in a social media post in November. At the time she said in a video message: "I have a little knee update, for those who've been wondering. I did have my pre-op last week, and, unfortunately, it didn't go exactly as I hoped it would. According to my doctor, eight months of performing on a torn meniscus did not do my any favors. The injury has not improved; unfortunately, it's gotten worse. So surgery has had to be pushed to the end of the year — after Christmas, after the last Rams game — and then it'll be a full month before I can do anything at all again. So no shows, no performing, no nothing. I'm super disappointed at that; I was hoping to already be on the mend by now. But it is what it is."

In an October 2022 interview with Meltdown of Detroit's WRIF radio station, Nita said that she had "been touring with a torn meniscus since May. So I'm actually not as injury prone as I usually would be, because I'm taking it a little easier," she added. "I have surgery scheduled at the end of this tour, between Rams games and everything else I have going on. So right now I've been playing through the most serious injury I've ever had and really just trying to take care of that, make sure it doesn't get worse before it gets better."

Asked if she has had to take cortisone shots in order to deal with the pain while performing on stage in recent months, Nita said: "I've had two. I now can't have any more because it's too close to my surgery date. It's getting tough now, but we're making it through.

"All I can really do is keep it under control," she explained. "It's just the realities of running around on stage for 20 years; every once in a while you're gonna get hurt."

According to the Mayo Clinic, a torn meniscus is one of the most common knee injuries. Any activity that causes you to forcefully twist or rotate your knee, especially when putting your full weight on it, can lead to a torn meniscus.

Nita made her live debut with Demi in July with a performance of Lovato's single "Substance" on ABC's Emmy Award-winning late-night show "Jimmy Kimmel Live!".

In October, Nita released a new solo single and accompanying music video, "The Wolf You Feed". The track features a guest appearance by Alissa White-Gluz of ARCH ENEMY.

"The Wolf You Feed" was the second song Nita has released featuring a star guest vocalist, the first being the "Dead Inside" which featured guest vocals from DISTURBED's David Draiman and saw Nita become the first ever solo female to have a No. 1 hit at Active Rock radio. She also returned to her instrumental roots last year with the release of single "Summer Storm", a fast-paced, emotive shred-fest.