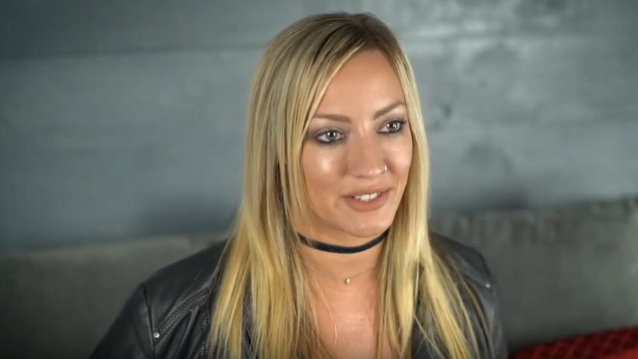 NITA STRAUSS: 'This Has Been The Busiest Year Of My Life'

In a new interview with The Sessions, Nita Strauss, the Los Angeles-based guitar shredder for the ALICE COOPER band, spoke about how she has been using the downtime during the coronavirus pandemic. She said (as transcribed by BLABBERMOUTH.NET): "Honestly, I can say without hesitation this has been the busiest year of my life. It really has. Because every artist has been forced to adapt; you adapt or you die. Not literally, but you must adapt, you must pivot in the 2020-2021 era. So I released my online guitar course. I put together three modules that take someone from picking up the guitar for the very first time all the way through all the techniques that I know, basically. And it's called 'Rock Guitar Fundamentals'. And the web site is the best URL ever — it's IWantToPlayGuitar.com, which I love. I started a Patreon page, so that's where I do weekly live streams with them. I taught my way through almost a full Alice Cooper set and a bunch of different technique, sort of, workshops and everything like that. I've been writing my second solo album, which I'm very excited about. We built this pretty studio that you see behind me. It's barely just getting finished up, so we actually built this from the ground up, which was a huge learning experience. I didn't know how many walls you need to soundproof a room, especially when you have someone like Josh [Editor's note: a reference to Nita's longtime boyfriend and manager Josh Villalta] hitting the drums in here. So it's been whirlwind of a year, but it definitely has also been a gift of time. So many things that I wanted to do that I was just getting so overwhelmed with that we now have the time to do."

Strauss's new disc, which is tentatively due later this year, will be the follow-up to her first solo LP, "Controlled Chaos", released in 2018 via Sumerian Records.

Last year, Nita told Heavy New York that her second solo album will still be "an instrumental shred record. I put a lot of different facets of my personality — of which there are many — on 'Controlled Chaos', so you'll see the more aggressive side still, you'll see the lighter side and the happier side, the more peaceful side," she said. "I just finished one of the ballads for this record, and I'm immensely proud of how it came out. So there will definitely be a wide spectrum of different emotions going on. And the biggest change, I guess, would be I am gonna have a guest singer or two on a couple of songs on this one. So that would be the main difference between the two records."