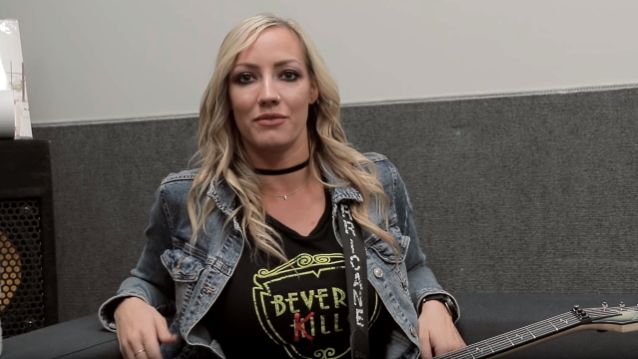 Nita Strauss, the Los Angeles-based guitar shredder for the ALICE COOPER band, is continuing to use the coronavirus downtime to complete work on her sophomore solo album.

A number of artists have seen their concert dates drop off as they're either canceled or postponed in the wake of the global spread of COVID-19, the disease caused by the new coronavirus.

Earlier this week, Strauss spoke to That Drummer Guy about the progress of the songwriting and recording sessions for the follow-up to 2018's "Controlled Chaos". She said: "It's coming along, definitely. It's very well on the way. It's really exciting to get to have the time to really put into it, because when I was making 'Controlled Chaos', I was on tour most of the time, so I was doing it in hotel rooms and working at the desk, using my dressing room table as a desk, to record guitars whenever I could. So it's actually really gratuitous to have this time. Obviously, it's a terrible situation, but I feel lucky to be able to take this time and use it to just be at home and get creative."

Nita also talked about her overall approach for the upcoming disc, saying: "I'm really coming from a more emotional place and where I wanna be, technique-wise, to execute the things I wanna do. Of course, you can always get better, but I'm not really focusing on woodshedding and chops and trying to reinvent the wheel with my own technique right now. It's more coming from a more emotional place of how can I say something important with these songs… You have to put [emotion] into instrumental music even more, because I think a lot of people have the conception of instrumental guitar music that it's just shredding — just solos, that it doesn't have any depth and meaning to it — and that's not always the case."