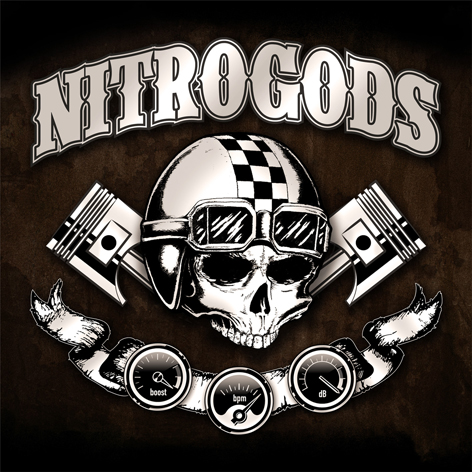 A video for the song "At Least I'm Drunk" was recently completed and will make its online debut later this month.

The band may still be unfamiliar to the public at large, but the three members are renowned musicians with illustrious histories to look back on. Guitarist Henny Wolter founded THUNDERHEAD in 1988, played with PRIMAL FEAR and SINNER for number of years and was part of the Rock Meets Classic touring band. Drummer Klaus Sperling (FREEDOM CALL) was also with PRIMAL FEAR for a long time. And at the epicenter of the NITROGODS soundquake is a heavyweight who is impressive in every respect: Claus "Oimel" Larcher, a bear of a musician whose bass performance stands for sheer power and whose voice unmistakably reflects countless liters of beer and whiskey.

"I wanted to return to playing the music that I love," says Henny Wolter, "and that only works if you play it with your best friends."

Fast Eddie Clarke comments on his collaboration with the NITROGODS: "I first met Claus from the NITROGODS in 2005 when I did a benefit gig for the victims of the tsunami in Indonesia. So I was happy to say yes when asked to do a solo on their new album on the track 'Wasted In Berlin'. I have to say the tracks they sent me sounded great. The band has great spirit and they all play extremely well together. So if you like fast and furious rock, you should give this a listen. I can assure you you will not be dissapointed..."

Dan McCafferty on NITROGODS: "I have just had the pleasure to record a song with a new band called NITROGODS. Henny and I met and became good friends on the Rock Meets Classic tour 2010. Having heard other material for the album, I think it will be a fine one. Hope you enjoy my contribution on 'Whiskey Wonderland'. I wish the GODS the best of luck. Welcome to the rock 'n' roll world!"