According to The Local, IRON MAIDEN fans who complained about the sound quality of the band's concert in Sweden this past summer won't get a refund.

IRON MAIDEN performed in front of a sellout crowd of 55,000 at the new national stadium in Stockholm — Friends Arena — on July 13. The venue has a roof which meant that for the first time ever in Sweden, IRON MAIDEN fans were able to enjoy the full glory of the entire "Maiden England" show in a dark stadium.

"It's the worst sound I've heard in 40 years. I felt that I had been completely duped out of all my money," concert goer Per Svedenbring told Sveriges Television (SVT).

"I would rather have sat at home and watched the concert on television."

A review of the show at MaidenRevelations.com reads in part: "The great Doug Hall is no longer in charge of MAIDEN's front-of-house, and there has been widespread criticism of below-par sound quality throughout the tour."

It continues: "The sound where I stood was not critically bad, but some issues are obvious. The general sound level seems a little low for such a huge arena, and the guitars are sorely missing in the mix, with even the solos sometimes being hard to discern. Nicko's [McBrain] drums are booming and present throughout, but Steve's [Harris] bass (of all things) go missing with regularity. There's something weird about hearing the intro to 'The Clairvoyant' without actually feeling the bass in your gut…

"Yes, this is an issue. There is no reason why the best band in the world should not have the best sound in the world. It's been an ongoing complaint since the first gig of 2012, and over a year later I have to agree — the sound lets the band down, and is also a lot less than the fans deserve."

Live Nation listened to the complaints and conducted an internal investigation with concert staff who worked on the gig. They concluded that the sound quality was good enough but did express regret that some concert goers did not enjoy the show.

"Sound experience during a concert is subjective judgement where the artist's artistic freedom may play a decisive role," it wrote.

"Should a refund be considered for the concert goers who are displeased with the sound but not for those sitting beside them who are content with the sound?"

IRON MAIDEN's setlist for the Stockholm concert was as follows:

Fan-filmed video footage of the entire show can be seen below. 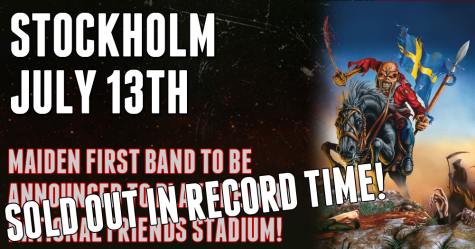