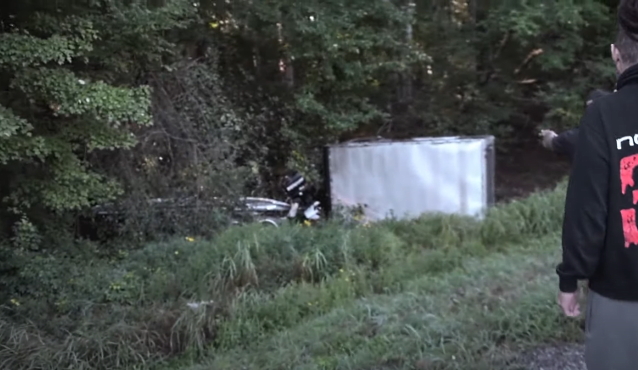 During the first week of September, NONPOINT was on tour for the first time in two years. While traveling from one show to another, the band's trailer unhitched and crashed into a wooded area, damaging equipment and merchandise. While all of this was going on, two of the bandmembers also contracted COVID-19 and had to leave the tour altogether.

"If someone hadn't been filming when it all happened, people probably wouldn't believe it," singer Elias Soriano says about the band's most taxing and obstacle-filled week in years.

You thought it couldn't get worse than 2020 and dealing with COVID? How about watching your trailer full of gear roll off into a Tennessee forest at 75 miles per hour?

Watch the video update below to get the full story, and then visit www.nonpoint.com for the chance to purchase an exclusive design to help with offsetting shortfalls and damage from the band's brush with COVID as well as the accident with their trailer.

Last week, NONPOINT rescheduled just under a dozen shows on its current tour after "multiple members of the band" tested positive for COVID-19.

Prior to the launch of the trek, Soriano told Bernard Cana of The Photo Pit about his band's plans to offer "VIP experiences" to its fans on the tour: "I'm nervous because of what's going on with COVID, to be able to be that up close and personal on this next run. We're having a VIP experience where we're trying to give them some kind of experience where they get to see us up close and ask questions and take pictures with us without possibly catching it from one us, God forbid — if we happen to catch it. So, what we're trying to do and what we've done and decided in our camp… We're all vaccinated. We're gonna stay inside the bubble. We're gonna make sure that the backstage area is pretty much situated and taken care of, keep our crew — especially our tour manager and our merch person, who's really gonna be in and out the crowd a lot, try to keep them safe and keep people around them masked up, hopefully, if there's that ability to do so.