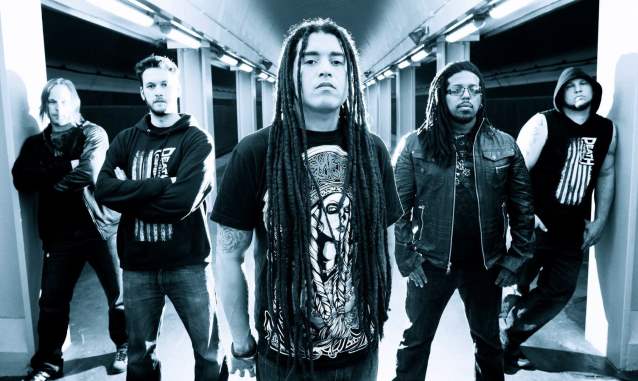 NONPOINT has parted ways with guitarist Dave Lizzio and has replaced him with B.C. Kochmit (EYE EMPIRE, SWITCHED).

Comments Lizzio: "I know that there has recently been a lot of speculation, question, worry, and concern regarding my current position with the band. And to clarify, once and for all — I am very, very heartbroken to acknowledge that I am no longer going to be the lead guitarist for this incredible band.

"Please understand that this decision was not an easy one for myself or anyone in the band to have to deal with, but it was determined to be necessary and I completely understand why it needed to happen. The details, as you can imagine, touched a variety of professional facets and I hope you all realize that these cannot all be 'public' details in many cases, and I sincerely wish that you all respect that.

"I am, and always will be, on good terms with my brothers in NONPOINT and I can only hope that this new album continues to propel them even further along their musical career, morseo than ever before. I am so proud of the work we all did on this new album and I can't wait to share it with all of you. I hope you continue to support them with the same tenacity and love you all gave me personally."

Metal Blade Records recently signed NONPOINT for all territories outside North America, where the band remains signed to Razor & Tie.

NONPOINT's eighth full-length album is scheduled for release this fall. The CD was recorded at Groovemaster Studios in Chicago with Grammy-nominated producer Johnny K (DISTURBED, STAIND, MEGADETH) and Daniel Salcido. A video for the song "Breaking Skin" is being filmed this weekend in Chicago, Illinois.