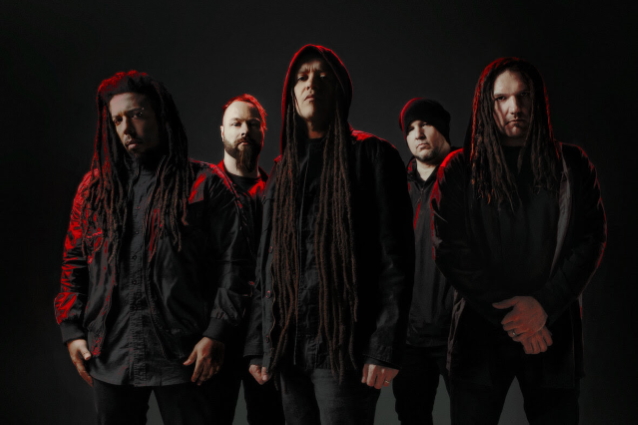 NONPOINT has rescheduled just under a dozen shows on its current tour after "multiple members of the band" tested positive for COVID-19.

The band shared the news of the dates being moved in a social media post on Thursday. The statement reads: "Now due to multiple members of the band testing positive for Covid, we unfortunately have no choice but to begin rescheduling more shows on the 'I'm About To Explode' Tour. We unfortunately have to postpone Battle Creek, Indianapolis, Fort Wayne, Charleston, Huntsville, Charlotte, and we will be unable to perform at Orlando's Rebel Rock. As it stands, we are hoping to be back on the road by Sept 28th, but we have to allow time for us to get healthy again and as we also had an incident with our trailer and our gear, we have to assess what we logistically can manage.

"Touring in these times has proven to be hard for our camp, so I hope you understand that we’re taking time to regroup, get healthy, and re-plan. That being said, we appreciate the support of our fans and clubs as we try to figure out our next steps. We will update again in the coming days about the health status of the band, and about any more info on this tour as it develops."

The new dates are as follows:

All current ticket and VIP holders will have their tickets moved forward.

Last month, NONPOINT frontman Elias Soriano told Bernard Cana of The Photo Pit about his band's plans to offer "VIP experiences" to its fans on its current tour: "I'm nervous because of what's going on with COVID, to be able to be that up close and personal on this next run. We're having a VIP experience where we're trying to give them some kind of experience where they get to see us up close and ask questions and take pictures with us without possibly catching it from one us, God forbid — if we happen to catch it. So, what we're trying to do and what we've done and decided in our camp… We're all vaccinated. We're gonna stay inside the bubble. We're gonna make sure that the backstage area is pretty much situated and taken care of, keep our crew — especially our tour manager and our merch person, who's really gonna be in and out the crowd a lot, try to keep them safe and keep people around them masked up, hopefully, if there's that ability to do so.