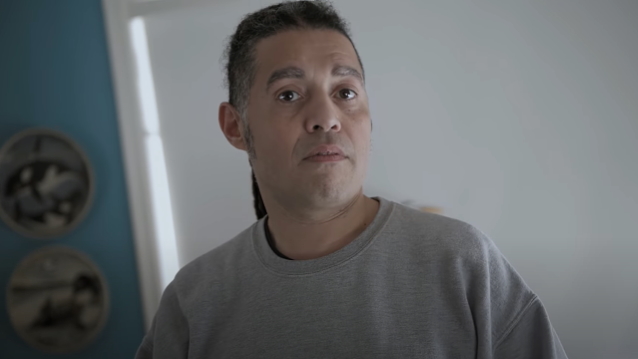 NONPOINT frontman Elias Soriano spoke to Bernard Cana of The Photo Pit about his band's plans to offer "VIP experiences" to its fans on its upcoming tour. He said (as transcribed by BLABBERMOUTH.NET): "I'm nervous because of what's going on with COVID, to be able to be that up close and personal on this next run. We're having a VIP experience where we're trying to give them some kind of experience where they get to see us up close and ask questions and take pictures with us without possibly catching it from one us, God forbid — if we happen to catch it. So, what we're trying to do and what we've done and decided in our camp… We're all vaccinated. We're gonna stay inside the bubble. We're gonna make sure that the backstage area is pretty much situated and taken care of, keep our crew — especially our tour manager and our merch person, who's really gonna be in and out the crowd a lot, try to keep them safe and keep people around them masked up, hopefully, if there's that ability to do so.

NONPOINT will play several shows with ATREYU early next month before kicking off the "I'm About To Explode Tour Pt. 1" with special guests SAUL, DROPOUT KINGS and ANY GIVEN SIN on September 11 in Easton, Pennsylvania.

I'm About To Explode Tour Pt. 1 with special guests: SAUL , Dropout Kings , Any...