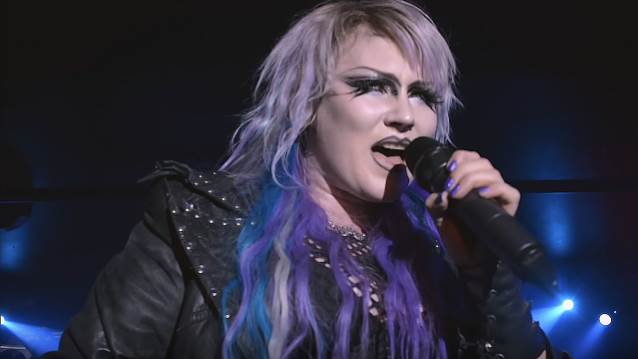 NOORA LOUHIMO On Joining BATTLE BEAST: 'I've Felt Since The First Gig That This Is What I Was Born To Do'

MIC Studios conducted an interview with frontwoman Noora Louhimo of Finnish metallers BATTLE BEAST at this year's Sweden Rock Festival in Sölvesborg, Sweden. You can watch the entire chat below. A few excerpts follow (transcribed by BLABBERMOUTH.NET).

On how she came to join BATTLE BEAST:

Noora: "It was 2012. They actually found me through YouTube when I wasn't in a band. I used to sing more acoustic gigs and [was] performing as a guest star in different kinds of bands in my hometown. They saw this video of me singing Janis Joplin. And Janis Joplin is my biggest female idol ever, so when they saw this video, they asked me if I wanted to join the band. Then I was in because when I heard the band, I actually got to know the band's music just two weeks before this call and I really loved it. I really loved it. I think it was some kind of bullshit at first. [Laughs] Yeah, when we spoke on the telephone, I just got on and they told me, 'We got a little bit over a month's time before we have a one-month tour with SONATA ARCTICA. We need someone to sing the songs with us. Can you please help us?' I was like, 'Okay, why not?' I don't really feel like I'm 'stuck,' I've felt since the first gig that this is what I was born to do."

On getting to know her BATTLE BEAST bandmates:

Noora: "I actually got to know the guys on the tour because we had never met before. Actually, the same week when they asked me to join the band, they came to my hometown from Helsinki to Tampere and I had my own show in the local bar and they came to see if I was good live and how I performed and kind of the final decision was made on that day. We were already on that night scheduling all of the sessions at the studio and whatever. It was a really quick thing. [Laughs]"

Noora: "Well, of course, we've had our dramas. Before I came into the band, there was the previous singer who left the band and then we kicked out one of our bandmembers in 2015. But, now that we have Joona [Björkroth], our new guitar player, who also writes a lot of music, he's a long-time friend with the band and I think we are at our best right now. We have a really good atmosphere. I think, to give some advice for any band, is that you keep communicating and practicing how to communicate because, for example, in our band, there is six different kind of people and everybody's got their own opinions and tempers and whatever, but, you have to learn how to communicate, how to compromise and also, you have to have a common goal. If someone in the band has something like 'Yeah, I want to be a rock star and I want to be this and that.' It doesn't work that way. If you want to be in a band that will continue after year after year, you don't be selfish. You have to have a common goal and go towards that and do everything that you can to make that happen."

On the band's approach to social media:

Noora: "Actually, the kind of common social media stuff, like putting stuff on Instagram, Facebook, Twitter, we do it ourselves, because it's more easier. We don't have to call, 'Hey, you do this.' Or, hire someone to be with us. It's also fun because we have different situations behind the curtains. Also, it makes it more personal with the fans when they know 'Okay, the band itself is doing the social media.' When we released our album, we have a P.R. person or persons who will do some of the social media stuff, but, mostly, every day, we do social media by ourselves."

On what she would change about the music industry:

Noora: "Of course, you can always improve things. The thing is that you have to always learn. For example, festivals, if something doesn't work, feedback is very important. I think if you don't give feedback and you don't get feedback, then nothing's going to happen, nothing is going to get better, ever. I think it doesn't matter which business you are in or industry, but you have to get criticism and give criticism. I think that is one thing that maybe could be improved in this industry, that people are more open with criticism, like creating and building criticism. Not just saying, 'This is bullshit', or 'This is good.' But, actually giving an argument, giving your opinions and share it with people in a common sense. I think that would really help people to make things better. In this industry, for example, I can give a good example of myself. When I had bad criticism or someone had said, 'Hey, you should do that better.' Okay, I always try to develop myself and if I would feel, 'Okay, I'm ready. I don't need to do anything.' Then, I could just quit because that's something as a musician you have to always have the drive to develop yourself to be better musician yourself. Also, in this industry, there are so many different kinds of people in different professions that I think they need to have the same kind of feeling and drive to develop anything that they do."

BATTLE BEAST's fourth album, "Bringer Of Pain", was released in February 2017 via Nuclear Blast Records. The ten-track disc was recorded and produced at JKB Studios by keyboardist Janne Björkroth, was mixed by Björkroth alongside Viktor Gullichsen and Mikko Karmila, and was mastered by Mika Jussila at Finnvox Studios. The cover artwork was crafted by Jan Yrlund.

"Bringer Of Pain" was BATTLE BEAST's first album to feature guitarist Joona Björkroth, who joined the band in 2015.

BATTLE BEAST in February 2015 parted ways with lead guitarist and main songwriter Anton Kabanen due to "insurmountable disagreements" with the other members of the band.