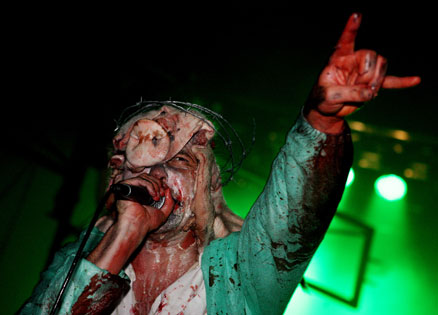 MAYHEM frontman Attila Csihar, who himself wore a pig's head during the performance, told the Norwegian newspaper VG, "We were very pleased with the concert and it seems like the audience loved it." He explained that there is a symbolism in the stage performance and that he himself is a vegetarian.

"We wish to reflect society," he said. "Everyone who eats meat becomes fatter and fatter and slowly but surely turns into a pig."

The frontman also claimed that MAYHEM's stage show was cleared with the festival organizers and that the idea to do this came from him. He also revealed that he was surprised by all the media attention surrounding the concert.

When asked by the Swedish newspaper Aftonbladet why the band chooses to use dead animals as part of its stage show, MAYHEM bassist Jorn Stubberud (a.k.a. Necrobutcher) said, "We play death metal and this fits our music." Asked if he could understand why people reacted to the photos from the concert the way they did, Stubberud said, "But aren't there more important things going on in the world? I think you should write about what's going on in Lebanon instead."

A little over 2,500 people attended the 2006 edition of the Gates of Metal festival, which was held in Hultsfred.

"We lost money this year — how much we don't know yet," festival organizer Olof Wikström told the Swedish newspaper Östran/Nyheterna. "In total, there were 5,000 tickets for sale and we expected at least 3,500 people to show up."

Despite this, Olof Wikström insisted that the festival will carry on.

"We will definitely continue," he said.