Florida death metal veterans OBITUARY have announced the "11th Hour 12-Pack Studio Live Stream", set to take place Saturday, September 25 at 5 p.m. EDT. Tickets and merch bundles are available at www.ObituaryLive.com. The broadcast will be available for viewing up to two weeks after the initial stream and on demand for an additional two weeks after.

OBITUARY comments: "Down to the wire...as the band is in the studio, putting the final touches on the new album, we are also gearing up and preparing for the U.S. tour with BLACK LABEL SOCIETY which is just a few weeks away. With that said, we know that fans around the world are also waiting and wondering when they will be able to see us perform live so this is what we are going to do: We are setting the cameras back up in the studio and will stream one of our final rehearsals for everyone to be a part of!

"We are picking 12 songs for the tour setlist and are turning to our fans for help! We want to hear from you guys which songs we should play so let's hear it! You tell us which songs you want to hear and we will monitor all our socials and the Obituary website for all of your song suggestions and YOU GUYS will help us pick the setlist for the tour AND we will play them in front of the cameras for you guys! We'll taking suggestions all week and unveiling the setlist next Monday, September 20th!

"We are also going to bring you inside the studio to witness the boys writing, discussing and working on new material plus give you a little taste of the new album and play you guys a new song, if that sounds cool with you!”

"We are officially calling this the '11th Hour 12-Pack Studio Live Stream'!

This past March, OBITUARY frontman John Tardy told France's United Rock Nations that the band has used some of the downtime during the coronavirus pandemic to work on material for a new studio album. "We've definitely been working on new tunes, and we've been taking our time," he said. "We didn't feel like releasing [a new album] now in the middle of the pandemic when you can't go on tour and support it is not what we wanted to do, so we're in no hurry. But by the time next year comes around, we're gonna be hitting the road again. We're getting tours set up, and we will be releasing another album next year before we hit the road and start touring again. So we are currently working on new material." 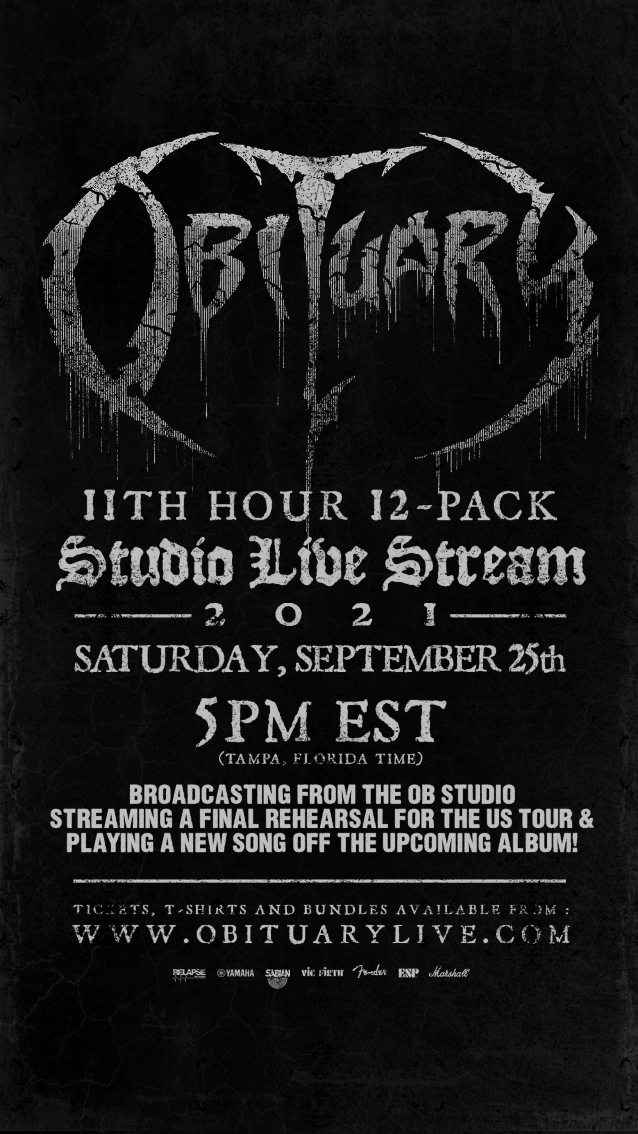