OBITUARY To Embark On East Coast Tour With EXMORTUS

OBITUARY comments: "We are super excited to announce the U.S. 'East Coast RedNeck Run II' and are really looking forward to this. It would have been easy to set up shows in the typical cities and venues but we are not your typical band. We are looking for an adventure and something different so we have booked smaller towns and markets so the fans who don't often have the chance to experience an OBITUARY show get their chance!! We have never been to some of these cities, so we are looking forward to invading them and throwing down with you guys!! More details to come on ALL LEVELS of the OB VIP experience, so hang tight and hang on to your ass because this could get crazy!!"

OBITUARY will head to Europe in November to perform with SLAYER, LAMB OF GOD and ANTHRAX on a 24-date tour.

OBITUARY recently announced a reissue of 2017's self-titled full-length release, featuring two bonus tracks not included on the original pressing and alternate artwork. The band will also release the first official vinyl pressing of the "Ten Thousand Ways To Die" EP, featuring live recordings of 12 classics and fan favorites from the band's storied catalog recorded on the 2015 world tour. The limited-edition OBITUARY vinyl is due out August 31 on Relapse Records.

After parting ways with Roadrunner following the release of 2005's "Frozen In Time", OBITUARY released two albums via Candlelight Records — 2007's "Xecutioner's Return" and 2009's "Darkest Day" — before signing with Relapse Records in 2014. 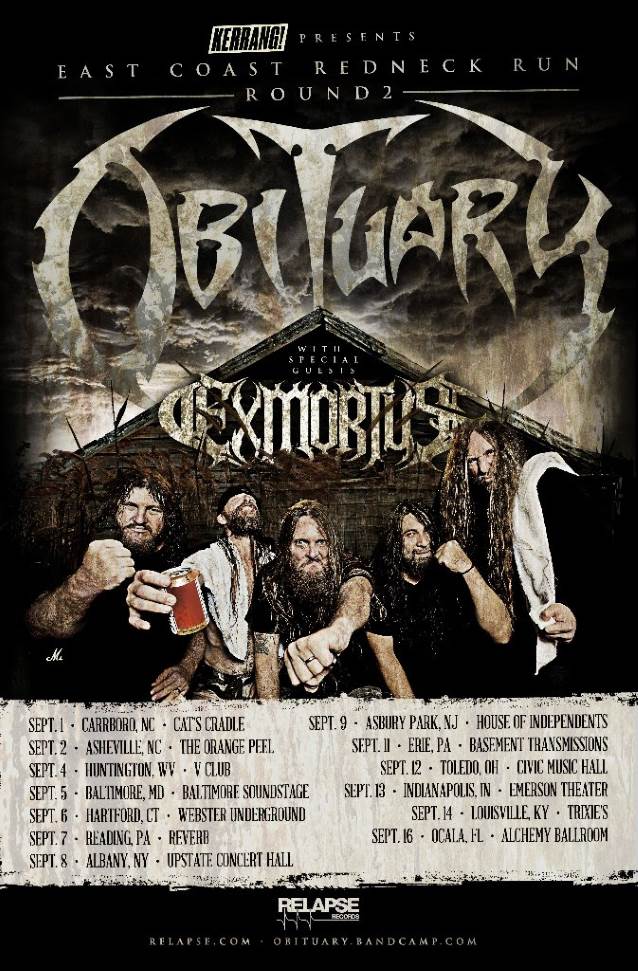