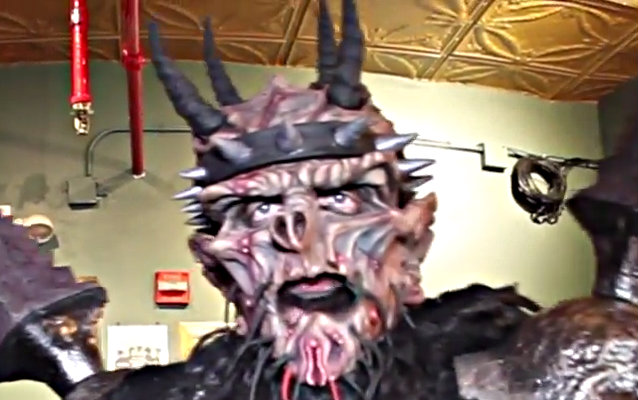 ODERUS URUNGUS: 'GWAR Is A Band That Can Last A Million Years'

Anthony Toto of Pop-Break.com recently conducted an interview with GWAR frontman Oderus Urungus. A couple of excerpts from the chat follow below.

Pop-Break.com: For the fan or music listener that has never seen GWAR, how would you describe a GWAR show?

Oderus Urungus: Well, besides being the most insane, outrageous, and prestigious show in rock 'n' roll history, it's kind of like a big sledgehammer right upside your head. GWAR will go down in history as being the craziest fucking show ever. Unless you've seen it, experienced it, and lived through one of these shows, you truly have not tapped into the full potential of your being and I urge you to do so. It's like smoking crack, having sex, or riding a roller coaster; it's something you have to do at some point in your life. Once you do so, you will forever be our slave and held within our thrall! A lot of people cling to these spooky or scary monsters from outer space. Well whatever, we're the only real monsters on this planet with the possible exception of Miley Cyrus' vagina.

Pop-Break.com: Your band has been around for more than 25 years. The trends come and go but GWAR is always here, the power never vanishes, and the sound is always in your face.

Oderus Urungus: We're immortal, you know! I have been saying that since day one! If you're immortal, you never die and you just keep doing it. It gives us a tremendous advantage over other bands. A lot of bands will come out and put out a great album. They will get the success; start doing drugs, start believing their own hype and then they start overdosing. They will put out their second album and it sucks and everyone hates them because they turned into a bunch of fat, drunk, and boring old freaks. With GWAR, it's quite the opposite. We were born, reborn, as I said, in Antarctica. We put out an album and it took us a little while to de-thaw all the way. I think it took about eight albums actually till we were finally de-thawed and we were finally playing up to our full potential. GWAR is the exception to rock 'n' roll history as a band that continuously gets better every year instead of getting worse. We will continue to do so because we will live forever. Even if my body is disintegrated, I have 50 other Oderus clones down in my basement. Just as truly as "Cats" is playing on Broadway tonight, GWAR is a band that can last a million years.

Pop-Break.com: You brought up consistency and improving every year. The 2000s were extremely productive for your band. You created a slate of albums your fans embraced and enjoyed. GWAR remains highly creative and productive with releasing new music.

Oderus Urungus: Yeah, we do. We're very prolific. We had our 25th anniversary a few years ago. We wanted to do a special two-year-long anniversary party by putting out one album at beginning of it and one album at the end of it, that was "Lust In Space" and "Bloody To The Horror". We really worked hard to get that done. After we lost the mighty Flattus Maximus when he returned to the stars, we wanted to jump back into the songwriting process as soon as possible with his successor, the mighty Pustulus. We cranked out "Battle Maximus". That's three GWAR albums in four years and that's pretty ridiculous. I'm pretty proud of the band for being so prolific and so creative. They basically write the whole fucking album and they play it. I don't show up for any rehearsals. I kind of stumble into the recording studio and bellow a whole bunch of bullshit that they did together to make it sound like I know what I'm talking about. It's been working out okay so far. We have the added dimension that we could just get as fat, gross, and horrible as we want. People will like us even more for that. We're not being judged on our looks or how many records we sell. Thank god, because we would fail miserably if that were the criteria. We go off our pure love of metal and chopping off people's heads, another thing that really gets us going. It's GWAR, what are you going to do with it? It's GWAR, it doesn't fit anywhere but goddamn it, you're going to have it in your house! It's GWAR, the band that really gets under your skin, gets under your nails, gets in your ears, and dyes your fucking girlfriends head. We take her bleach blond hair and dye it fucking bright pink! It's fucking GWAR, cultural phenomenon! It's fucking GWAR, from outer space! All that shit!

Pop-Break.com: You mentioned how Flattus brought a unique sound to GWAR during his run with the band. Pustulus, in his own way, brought his own style of guitar playing to the mix loud and clear, especially on "Battle Maximus".

Oderus Urungus: Yeah, I think so. He definitely takes us in a unique direction. As the winner of the Battle Maximus, he pretty much through trial by combat took the job. He bust in through the front door of the GWAR temple and went immediately into the recording studio and started laying down tracks. As soon as I heard him play, I immediately knew he was our guy. I really enjoyed working on this album with him. He was the other member of the Maximus tribe that was very similar to Flattus; they were the two most talented guitar players of their tribe. His style is a little bit different whereas Flattus was a little smoother and a little more technical, Pustulus is more thrashy and a little more venomous. He's just as good as Flattus in a different way. He was a fucking kick in the ass for us to get off our buts after suffering that horrible tragedy. That's exactly what he did. He came in there and kicked us right in the fucking nuts. We rallied around that and made one of our greatest albums ever. Everyone seems to think "Battle Maximus" fucking rules and it's on everybody's top-ten lists for favorite albums this year. I guess we're doing okay.

Read the entire interview at Pop-Break.com.