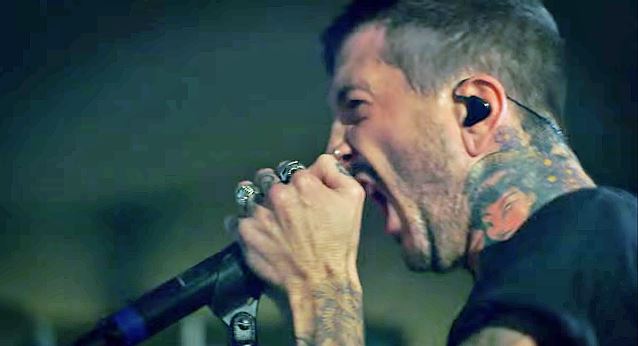 OF MICE & MEN singer Austin Carlile says that he is "never giving up" and has asked fans to keep sending messages of support, just three days after he became ill at the tail end of the band's "Full Circle" tour.

Carlile, who was forced to undergo surgery in 2010 for an enlarged aorta valve, was admitted to a hospital June 6, forcing the cancelation of the last two shows of the trek.

In a series of Twitter updates, Carlile explains that he has been transferred to Stanford University to be treated by "cardiologists and marfans specialists."

Marfans is a genetic disorder that commonly involves defects of the heart valves and aortas.

Carlile says: "Thank you for the get-well wishes, everyone. I'm transferring to Stanford University this week to be in care of my cardiologists and marfans specialists until my health situation at hand is under control.

"It has been a long past few days, and the ones following will be just as much of a struggle, but I can do this. And I believe that wholeheartedly. If I believe in it, so should you.

"I'm sorry to anyone who missed the last two shows of our tour. I would have much rather been there than a hospital bed, I assure you.

"Love to everyone, band, family, you. I'm never giving up. Thanks for being there for me.

"Waking up over and over in the middle of the night, or the nurses helping me pee, reading the tweets help."

"I don't like to talk about my heart thing," the vocalist told Revolver magazine, "because I don't want that to be what this band is about. Yes, I have to deal with it every day, and it's a hard thing sometimes, but being able to make music and get up onstage is what makes it easier to deal with. I don't know how I'd deal with it if I didn't have music."

OF MICE & MEN's latest album, "Restoring Force", hit No. 4 on The Billboard 200 chart and No. 1 on both the Billboard Top Independent and Top Rock Albums charts.