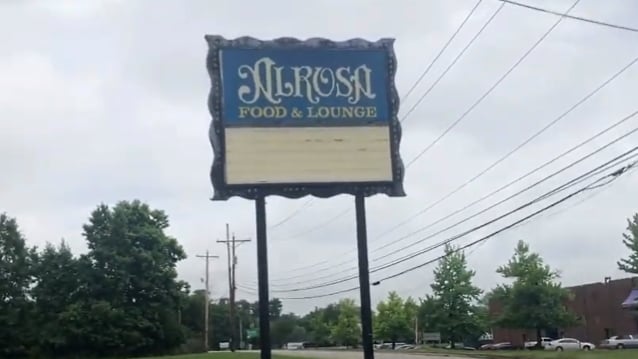 Ohio Club Where DIMEBAG Was Murdered Finally Gets Demolished (Video)

The Alrosa Villa nightclub in Columbus, Ohio, where PANTERA and DAMAGEPLAN guitarist "Dimebag" Darrell Abbott was murdered 17 years ago has officially been demolished. Plans are afoot to build a 180-unit fully affordable apartment community on the site where Dimebag and three other people were killed by a 25-year-old ex-Marine named Nathan Gale.

Located at 5055 Sinclair Avenue, Sinclair Apartments will address the need for high-quality affordable housing for Columbus-area residents earning between 30 and 70 percent of the area median income. The site will be transformed into a community of three-building, four-story apartments consisting of one-, two-, three- and four-bedroom units.

In addition to providing high-quality rental options for Columbus-area residents, Sinclair Apartments will improve the streetscape on Sinclair Avenue where Alrosa Villa once stood and is supported by local neighborhood association leaders.

For more than 45 years, the Alrosa Villa hosted local and national acts, including SLIPKNOT, KORN, QUIET RIOT, FOGHAT and BUCKCHERRY.

On the night of December 8, 2004, Gale charged onstage at the packed nightclub and opened fire on the band and crowd, before being killed himself by police officer James D. Niggemeyer, who arrived on the scene minutes after Gale began his rampage.

Vinnie Paul sued Alrosa Villa over his brother's death. The lawsuit was settled out of court in 2007 for what was described at the time as a nominal amount.

"What happened here on Dec. 8, 2004, was a tragedy for everyone and our hearts go out to the victims and their families," Alrosa Villa's then-manager Rick Cautela said in a statement issued after Vinnie Paul's lawsuit was dismissed. "There is nothing we could have done to stop it."

According to The Columbus Dispatch, the lawsuit said the Cautela family, which owned and operated Alrosa Villa at the time of Dimebag's murder, was negligent in not stopping Gale from entering the club with a gun and ammunition.

Gale jumped a fence surrounding a patio outside the club as DAMAGEPLAN began playing its first song. He then walked through the crowd and entered the stage from behind a stack of amplifiers. He pulled a handgun and shot Abbott in the head, then turned the gun on those who tried to intervene.

The carnage ended when Niggemeyer entered the club through a rear door and fatally shot Gale as Gale held a gun to Brooks's head.

The Alrosa Villa is no more. Wal Ozello

the famous alrosa villa music venue in columbus ohio is gone.. i feel so gutted.
it was my home. stomping grounds and place i worked for many yrs. tomorrow is the anniversary of dimes death as well.. i feel like the wind has been knocked out of me. pic.twitter.com/Rz2TEmP3yO