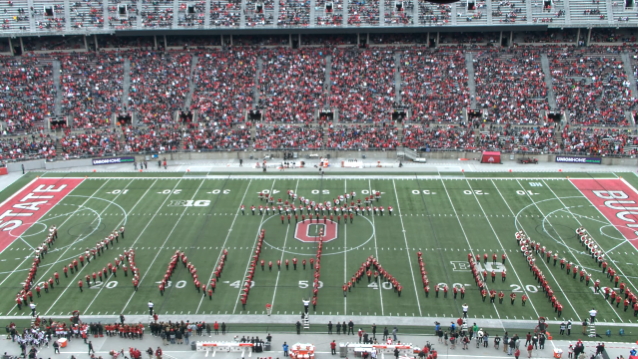 The band blistered through some of VAN HALEN's greatest hits, including "Runnin' With The Devil", "Dreams", "Panama" and "Jump". Formations spelled out "Van Halen", "Dreams", "Jump", "1984" and the band's iconic "VH" logo.

The Ohio State University Athletic Band performs at various Ohio State varsity sporting events during the autumn and spring semesters, with the exception of fall football games. The number of participants in Athletic Band each semester varies between 250 and 300 members.

Unlike the Marching Band, the Athletic Band includes all brass, woodwind and percussion instruments. Athletic Band is an open-enrollment ensemble, meaning anyone is welcome to participate.

Might as well jump! Here's a portion of Athletic Band's full @VanHalen halftime show from today. Full show at the link below! #GoBucks🤟🤟🤟 @WolfVanHalen