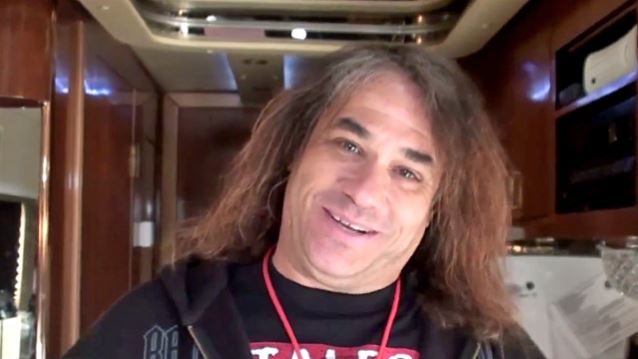 On The Tour Bus With EXODUS (Video)

Each episode of Digital Tour Bus's "Bus Invaders" takes you inside the touring vehicle of one of today's top touring acts. In the latest episode, which was filmed on April 11 in Joliet, Illinois, Steve "Zetro" Souza, vocalist for the San Francisco Bay Area thrash metal veterans EXODUS, gives you a tour of his band's bus during the "Dark Roots Of Thrash II" tour with TESTAMENT.

"Blood In Blood Out" is EXODUS' first album since the departure of the band's lead singer of nine years, Rob Dukes, and the return of his predecessor, Steve "Zetro" Souza, who previously fronted EXODUS from 1986 to 1993 and from 2002 to 2004.