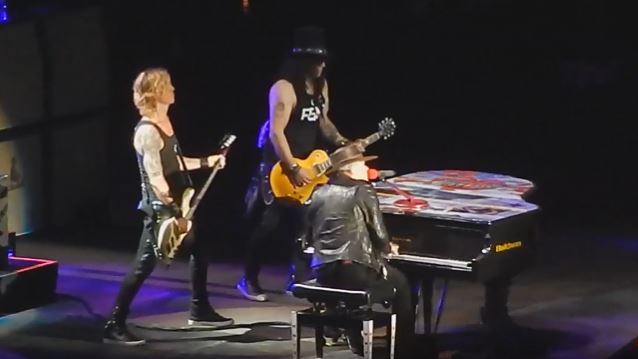 **UPDATE**: GUNS N' ROSES has released the following statement regarding the incident: "We in GUNS N' ROSES are shocked and extremely saddened to hear of the horrifying bus crash en route to our Mexico City show yesterday.

"Our thoughts and hearts are with the family of Mauricio Ballesteros Zamora. We are so very sorry for your loss.

"We hope for a speedy recovery to the 29 other injured fans.

According to Excelsior, one person was killed and nearly thirty others were injured after a bus carrying a group of GUNS N' ROSES fans to the band's concert in Mexico City on Wednesday crashed on the highway connecting Mexico state and Querétaro.

35-year-old Mauricio Ballesteros Zamora died after suffering head trauma and internal injuries, and 29 others were injured, three of them seriously.

It is believed that the bus driver lost control of the vehicle while speeding on wet roadway, causing the bus to overturn.

The injured people were transported to the IMSS hospital in Tepeji del Río de Ocampo.

GUNS N' ROSES played two shows in Mexico City this week and will play one more concert at Coachella next weekend. A full North American tour is on tap for this summer.