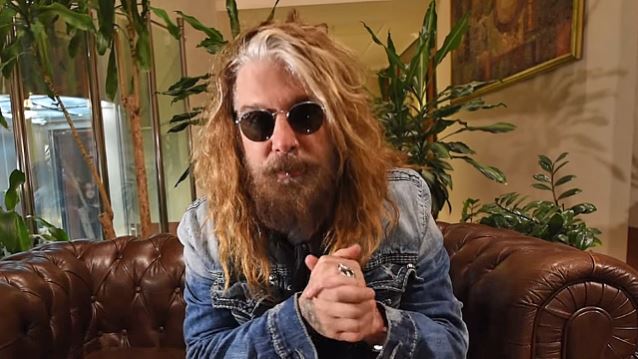 Ex-MÖTLEY CRÜE singer John Corabi has responded to Nikki Sixx's description of the band's self-titled album as "very unfocused," saying that he is "extremely proud" of the record and insisting that he has "nothing but mad respect" for his former bandmates.

In an interview with Sweden Rock Magazine, the MÖTLEY CRÜE bassist said that writing the "Mötley Crüe" LP with Corabi was a prolonged and difficult experience. He said: I think it was a very unfocused record. It was painful for me, because John Corabi can't write lyrics, and I had to do all that work.

"It was the first time I ever had to work with somebody that wanted to participate in the lyrics. And my standard is so high that it was so hard, it took months. Usually, I write a set of lyrics in an hour.

After Nikki's comments were first published by BLABBERMOUTH.NET on Wednesday (April 20),Corabi took to his personal Facebook page to offer the following response: "As my email, texts, and phone is blowing up over this, I'd like to publicly retort to this.

"Thank you to MÖTLEY CRÜE for the five years we had together. I'm extremely proud of the record we recorded TOGETHER!!!! And your phone call to me asking to join your band has honestly helped my career immensely. I have done everything since, MY WAY, under MY TERMS, and I'm happy knowing I haven't followed any trends, caved to any record label, and just basically been myself. I am who I am, I write the way I write, and I'm beyond happy being the person I am... I have nothing but mad respect for MÖTLEY, including Mr. Sixx... And wish them ALL the best with their future endeavors..."

In the Sweden Rock interview, Nikki also offered his theory as to why MÖTLEY CRÜE members Micks Mars (guitar) and Tommy Lee (drums) have both publicly expressed their fondness for the Corabi-fronted album. He said: "I think Mick and Tommy love that record, 'cause it's [got] great drums, great guitars. And, yeah, I think there was a freedom in having a different singer, you know. But it was just hard for me to have to go slow. I'm just not a good 'slow' guy in the studio. I've been in sessions with other artists where [someone is working slowly] and I've just gotta bail; I've just gotta go. It's, like, you can create on the spot or you can't create. That's it with me. I just don't have patience for that."