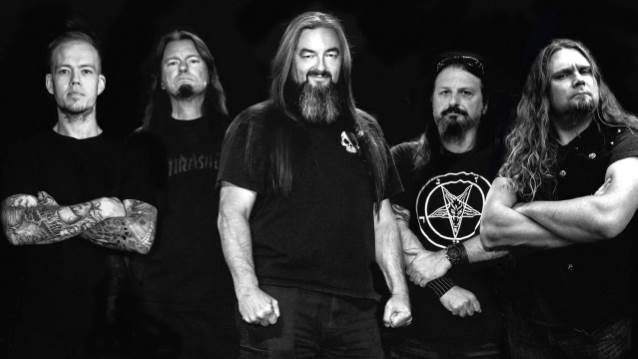 U.K. thrashers ONSLAUGHT will unveil their new lineup on the main stage at the Bloodstock Open Air festival on Friday, August 10 at Catton Hall, Derbyshire.

Rockett comments: "The band is genuinely sounding more powerful and aggressively focused than ever before.

"James has been a great friend of the band for many years and is one hell of a drummer — a complete thrashing machine; so solid and lighting fast. Exactly the same applies to Wayne; he's the perfect fit for ONSLAUGHT — an awesome all-round guitarist; his lead playing is full-on 'metal', no bullshit, exactly what you would expect to hear in our music.

"The Bloodstock show is gonna be explosive in the extreme! We'll see you in the pit!"

"Songs have been written, demo tracks recorded and the thrashing machine is racing forward at full throttle," the band said back in March. "This is shaping up to be ONSLAUGHT's most vicious and hard-hitting thrash metal attack yet!"

A song from ONSLAUGHT's upcoming disc will be debuted at Bloodstock Open Air, with more details to be revealed at a later date.