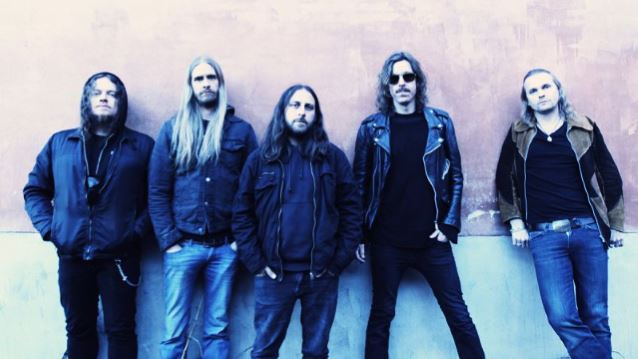 "Pale Communion", the highly anticipated eleventh studio album from Swedish progressive metallers OPETH, can be streamed in its entirety at Pitchfork.com. The follow-up to 2011's "Heritage" will be released on August 26 via Roadrunner Records. The cover artwork was once again created by Travis Smith — with art direction by OPETH mainman Mikael Åkerfeldt.

"Pale Communion", which was produced by Åkerfeldt and mixed by longtime collaborator and PORCUPINE TREE frontman/guitarist Steven Wilson, was heralded by the lead single "Cusp Of Eternity".

"The best way for me to write is always to just write the stuff that I want to hear myself," states Mikael. "I'm pretty headstrong, so a few negative reactions to 'Heritage' didn't push me in any way. That album started something new.

"Every record feels like part of a chain. We wouldn't have done 'Heritage' without the previous records and the same is true of 'Pale Communion'. I sat down and wrote the songs like I did for 'Heritage' and the one before that.

"'Heritage' rejuvenated the band a little bit and I could see a way to continue doing this band without focusing on what we're known for. We'd done that for so many records that I was a bit fed up with it. Now we have a future and 'Pale Communion' is the continuation of that."

Yet another compelling evolutionary step and a consolidation of the foundations laid down on "Heritage", "Pale Communion" is simply another sublime piece of sonic artistry from one of the greatest bands on the planet. From the skewed grooves and dazzling atmospherics of the opening "Eternal Rains Will Come" to the devastating orchestral sweep and melodic precision of the closing "Faith In Others", it is an album that expands OPETH's sonic palette beyond all measure while still retaining that mercurial essence that first made them such a unique proposition. As Mikael explains, "Pale Communion" is a record that came together intuitively and without compromise, driven forward by the magical chemistry between all five members of the band.

"I would have to say that we're happy band right now and there have been times when we weren't happy," he states. "Everyone's pulling their weight and it feels like a collective with the same ideas.

"We've been touring a lot for the 'Heritage' record, so we're a tight unit. We hang out a lot as friends. We play well and we get along well and we have a mutual understanding of where we want to take this band. And I know the guys can play anything. They're fantastic musicians.

"As I was writing the songs, Fredrik [Åkesson, guitar] came down to my studio to lay down some solos. He was really involved in the process and listening to whatever I came up with. It was the first record for Joakim [Svalberg, keyboards] and he's been really psyched about doing this record. Long before we started recording, he was saying that he couldn't wait to be involved, and he really stepped up to the plate. Axe [drummer Martin Axenrot] and [bassist Martin] Méndez are a tight unit too. Axe went over to Barcelona where Méndez lives to rehearse for a few days and then they put everything down in three or four days in the studio. It was easy. It was easy for everybody."

In keeping with OPETH's oft-professed love of the classic rock, hard rock and progressive records of the early '70s, "Pale Communion" was recorded at the legendary Rockfield studios in Wales. Soaking up the atmosphere of the place where such immortal albums as JUDAS PRIEST's "Sad Wings Of Destiny" and QUEEN's "Sheer Heart Attack" were recorded 40 years ago, Mikael could hardly have found a more suitable location for the recording of his band's new material.

"I do like many records that were made there and it's a legendary studio," he agrees. “We like to pay homage to that stuff. The place where we made 'Heritage' is famous for ABBA recording there, for instance! But Rockfield was available, it was fairly cheap, it was a residential studio and they cooked for us! It's right in the middle of nowhere so we know we wouldn't be distracted by the city lights or pubs or whatever. That's why we chose it. But then, of course, 'Sad Wings Of Destiny' was recorded there so it can't be complete shit! I think we could've made a good sounding record anywhere, but the location and the logistics of being there were good for us."

While "Heritage" was a proud move away from the digitised uniformity of modern metal and into the beatific warmth of old school analogue, "Pale Communion" is an altogether sharper and more vivid representation of OPETH's ongoing development. Overwhelmingly melodic and yet remorselessly diverse and unpredictable, these eight songs are as potent and mesmerising as anything in the band's illustrious canon. From the exquisite ebb and flow of "Cusp Of Eternity" — the first new song to be released into the wider world — and the epic, menacing sprawl of the ten-minute "Moon Above, Sun Below" through to the throbbing instrumental perversity of "Goblin" (which, of course, was inspired by the Italian prog band of the same name),the lush, country-tinged harmonies and rhythmic rumble of "River" and the gorgeous strings and pin-sharp melodic thrust of "Faith In Others" ("the best song Mikael has ever written…" according to Steven Wilson),"Pale Communion" is another flawless triumph from a band that seem to still be gathering strength and gaining momentum. Who knows what the future will bring…

"It'll be our 25th anniversary next year and we're 11 records in. We'll just see where it takes us, as always," says Mikael. "I hope people appreciate that we don't play by the rules. I want us to be in a position where we're accepted for what we are, and not what people want us to be. I guess we're a rock band but we do a little bit of everything and that's what I like about it. It makes it interesting and fresh for us as musicians to not be pigeonholed and to not be pure. It would be complete death for me as a musician to just do one thing. I admire bands that can do that, but are they true to themselves? Don't they have any other influences? That's quite impressive and probably harder than branching out. But we can't do that. It's impossible for us. I don't know where we're going next and that's exciting to me."