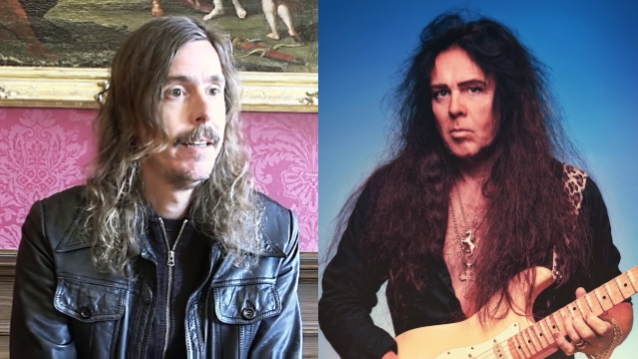 OPETH Frontman On YNGWIE MALMSTEEN: 'His Records Have Been Pretty F**kin' S**t For A Long Time'

Åkerfeldt offered his opinion as part of a Music Radar feature dubbed "The 10 Guitarists That Blew My Mind".

Speaking about Yngwie, Mikael said: "I hate him as much as I love him. I just want to shake him around, kick him in the ass and make him wake up to something. He is fantastic and he knows it. He has the most beautiful tone of all heavy metal guitar players, bar Fredrik [Åkesson, OPETH guitarist].

"I saw his latest video for his blues album, which I thought was appalling, cruising down the Miami streets in his Ferrari. That's not what I think of when I think of blues. It's pretty horrible.

"His records have been pretty fuckin' shit for a long time, but the guitar playing has always been great. The last one I loved was 'Odyssey', but now I just sound like a disgruntled OPETH fan. After that, he went a bit cheesy and got really bad.

“I feel like he should take care of his career better and maybe calm down a bit, focus on writing great songs. He's not giving himself the credit he is due; he just wants to carry on playing neoclassical at full distortion. But I still love him."

OPETH's 13th album, "In Cauda Venenum", will be released on September 27 via Moderbolaget / Nuclear Blast Entertainment. Recorded last year at Stockholm's Park Studios, the disc will be released in two versions, in both Swedish and English languages. Various physical and digital formats will be available.

Yngwie released a new album, "Blue Lightning", in March via Mascot Label Group. On the disc, Yngwie pays homage to those from the blues world who have fueled his artistic spirit for so long. Among the songs Malmsteen tackles on "Blue Lightning" are classics by THE BEATLES ("While My Guitar Gently Weeps"),Jimi Hendrix ("Foxey Lady", "Purple Haze"),THE ROLLING STONES ("Paint It Black"),ZZ TOP ("Blue Jean Blues"),DEEP PURPLE ("Demon's Eye", "Smoke On The Water") and Eric Clapton ("Forever Man").