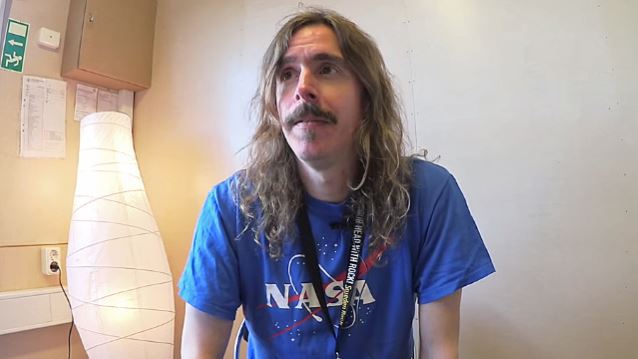 "At the time of hearing the news of Ian 'Lemmy' Kilmister's [MOTÖRHEAD] passing on the early morning of the 28th of December, I felt a familiar feeling deep inside. That of losing someone really close. Someone who's been present in your life for its whole duration. It's a very strange feeling that you can be so attached to someone you don't even know, and I didn't know Lemmy at all. I've met him on a couple of occasions. I remember calling him 'Ian,' as I'd had a few beers and wanted to come off as someone that possessed a little bit of a deeper knowledge of him than the aggressive selfie-hunters. Obviously, I failed miserably, and I don't think he liked me very much, and he didn't want to be called 'Ian' at all. He's 'Lemmy' and that's that. So on the subsequent 'meetings,' I resorted to a respectful nod and perhaps a feeble-sounding 'Hi!'

"I saw/shared a bill with many times, and I'm very happy I managed to catch their final headlining show here in Stockholm on December 4th. The place was packed. At a legendary venue for metal in my hometown. Hovet. There's a special feeling in the air. As usual, it was a celebration of heavy music as well as that of MOTÖRHEAD, SAXON and GIRLSCHOOL who were on tour together. But I also think a lot of people at the event knew that it's possibly the last time they'd be able to see MOTÖRHEAD. At least on a headlining tour.

"It was quite magical, I have to say. There's a profound feeling of respect in the air throughout the evening. I can't recall any previous show I've ever been to that had that same vibe, or even similar.

"In closing, just like hundreds of thousands of people around the world, I want to offer our deepest condolences to his family, to Mikkey [Dee] and Phil [Campbell] as well as to the MOTÖRHEAD crew, many of which are friends of ours.

"Oh, I'd also like to take this opportunity to recommend the Sam Gopal record from 1969, 'Escalator'. Lemmy is singing beautifully on this one. I was very surprised to hear him singing without his trademark rasp. However, I know most people, myself included, will try and find solace in the ever-enduring MOTÖRHEAD and HAWKWIND catalogue. He was someone really special. One of the last 'big' personalities in the scene. We will cherish the memory of Lemmy and his music forever.

"And… Today I was reached by the news of David Bowie's passing. He was such an important artist for OPETH. Many of you might find that hard to believe, but that's how it is. It's with terrible sadness we have to accept that he's gone. He made some absolutely incredible music and I still frequent his discography on a regular basis.

"When I was a young heavy metal kid I remember I made 'wish list' for my birthday. I wanted a heavy metal back patch for my jacket. Sure enough, I got a soft, flat wrapped up gift that indeed looked like it would include some cool metal patch. I eagerly tore it open only to find that the back patch had a print of, not IRON MAIDEN or the SCORPIONS, but of David Bowie's 'Let's Dance' record. I was a massive fan of that record but I wanted to look like a heavy metal fan, so I was slightly disappointed, and the patch never ended up on my jacket. Since then, I've fallen in love with his records. From 'Space Oddity' To 'Hunky Dory' and 'The Man Who Sold The World'. There are so many classics. Far too many to mention, really.

"Bowie was a pioneer, as far as I'm concerned. He never did was what expected of him, and he often changed his musical direction to almost the complete opposite to what he'd done previously. That's something I admire. Artists who seem unable to play it safe and just deliver what's expected of them. Artists who explore the world of music, and push their own boundaries as individual musicians. There's quite a few of them about still, but in Bowie we certainly lost one of the very best. And I still love 'Let's Dance', even if I certainly can't dance myself.