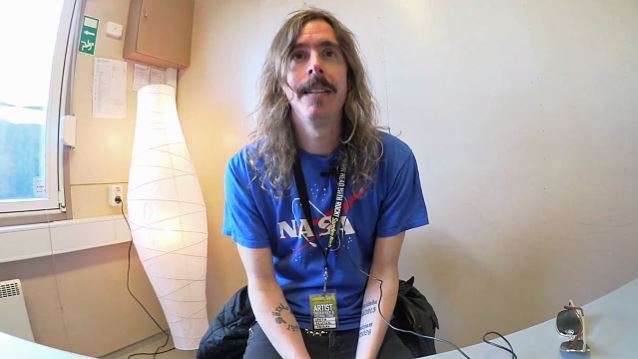 RockSverige.se conducted an interview with guitarist/vocalist Mikael Åkerfeldt of Swedish progressive metallers OPETH at this year's Sweden Rock Festival, which was held last weekend in Sölvesborg. You can now watch the chat below. A couple of excerpts follow (transcribed by BLABBERMOUTH.NET).

On whether any progress has been made on his long-rumored solo album:

"I don't know. Maybe. I actually got an offer from a record label to do a solo record not long ago. But, I mean, those rumors come from me saying that I would like to do a thing like that to learn more about studio production, like the technical aspect of recording a record. So I was thinking I'm gonna start in a somewhat easy way, with just an acoustic guitar and vocals — basically some type of singer-songwriter record. But, I mean, it hasn't materialized. And since then people ask me all the time, 'When is it coming?' So it was never decided, really; it was just, like, something I said."

On whether he has any material set aside already for a possible solo album:

"Well, nothing that I've written with the intention of putting it out as a solo record. It's just… I have snippets of songs that haven't ended up anywhere else. So I might… I might do something, but I don't think people should hold their breaths."

On whether there are any plans to release a second album from STORM CORROSION, the collaboration between Åkerfeldt and PORCUPINE TREE's Steven Wilson:

"I think there's a possibility that we… We don't really know what to do with another record — what would it be? The good thing with [the first] STORM CORROSION [album] was that there was no references and nobody really knew that we were making that record. So when it came out, it was just, like, out of nowhere, and nobody knew what to expect. But now, since we have a record [out], there's also a reference, which kind of makes it a bit dull — that we have to follow up this record. But both me and Steve, we loved making that record and we love the record; it's very much an acquired taste, I think. So we said if we feel like it, we'll do another one. But we prefer to do so when people, kind of, forgot about the first one."