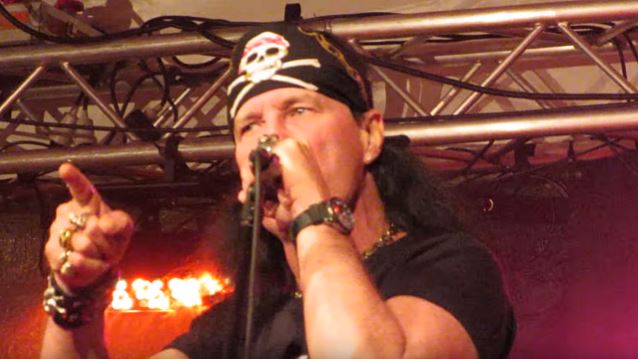 Original AC/DC singer Dave Evans has told The Sydney Morning Herald that his fans would want him step in for the band's current frontman Brian Johnson, who has been advised by doctors to stop touring immediately or risk total hearing loss.

"When I perform around the world the fans love my music and my performances and I hear what they tell me," Evans said."That's what they all tell me. They're pretty appreciative of my vocals and performances."

Evans had kind words for Johnson, who admitted in a 2014 interview that his hearing loss wasn't due to playing loud rock music every night for a living but was the result of Johnson's other obsession: auto racing.

"A lot of people make jokes about going deaf from listening to loud music," Evans said. "It's never been a problem for me.

"I just thought it was sad news. It's your lifeblood as a singer, live performances are so personal, without the crowd and the adrenalin, it's going to be hard for him. Performances are the big highs in our lives."

Evans added that his return to AC/DC will probably never happen. But, he said, "it would be nice to do one guest performance. [Former members] were all part of the band no matters what era they were from."

Regarding his hearing loss, Brian told Howard Stern in November 2014: "I didn't get it from music. I got it from sitting in a race car too long without earplugs. I heard my ear drum burst, because I forgot to put me plugs in under my helmet. That's how it happened. Music had nothing to do with it."

Johnson did not say when the incident in the car occurred, but said that he got very dizzy and sustained inner-ear damage as a result, even seeing blood when he removed his racing helmet. He added that it was "like tinnitus or something... You forget about it after a week."

AC/DC was forced to postpone the last ten dates of its current North American tour after doctors advised Johnson to stop touring immediately. The band has said it will reschedule the dates, possibly with a guest vocalist on the mic.

Johnson has been the band's singer since 1980, when he replaced Bon Scott. He made his recording debut with the group on the classic "Back In Black".

AC/DC has been on the road since last year in support of its 16th studio album, "Rock Or Bust", but this album cycle has been plagued with bad luck.

Founding guitarist Malcolm Young retired after he was diagnosed with dementia, while drummer Phil Rudd was arrested in late November 2014 on charges of drug possession and threatening to kill. The pair were replaced by Stevie Young and Chris Slade, respectively.