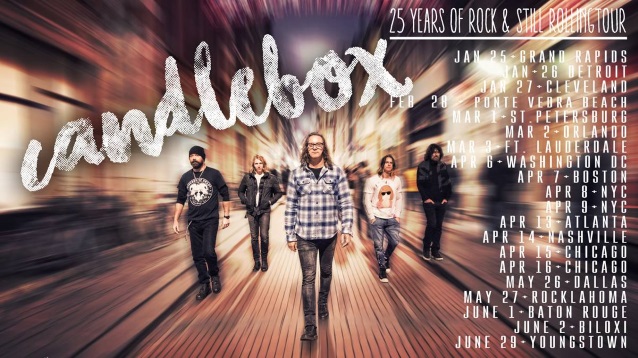 Original CANDLEBOX Lineup To Reunite For One Night Only In Seattle

'90s rock icons CANDLEBOX are celebrating the 25th anniversary of the release of their self-titled debut album, which was certified four times platinum, by doing what they do best — bringing their explosive, passionate performances to cities across the country as part of their "25 Years Of Rock & Still Rolling Tour".

Kicking off January 25 in Grand Rapids, Michigan, the trek will see this powerhouse band — Kevin Martin on vocals, Adam Kury on bass, Brian Quinn on lead guitar, Island Styles on guitar and Robin Diaz on drums — perform the hits from the album that launched its careers, including "Far Behind", "You" and "Cover Me" as well as offer a career retrospective by playing songs from the entire six-CD catalogue all the way up to their latest release, "Disappearing In Airports".

To keep the tour fresh and exciting for fans, frontman and founder Kevin Martin decided to incorporate a variety of show formats and performance styles that would highlight the band's dexterity. The routing comprises large venue concerts and appearances on such festivals as Rocklahoma as well as intimate acoustic dates that lend themselves to a story-tellers format.

"This tour is for our fans, those that have continued to support us for 25 years," said Martin. "It's been an honor to play for them throughout the years and we feel truly fortunate that our music continues to resonate with our audience. We can't wait to hit the road for this one — I think people will be in for some big surprises!"

In other news, the original CANDLEBOX lineup of Martin, Peter Klett, Bardi Martin and Scott Mercado will reunite for one night only to perform their debut album in its entirety from start to finish on July 21 at the Paramount Theatre in Seattle.

When asked how they felt about such a momentous occasion, Kevin said: "I can't believe its been 25 years. It seems like yesterday we were playing the first of three sold-out shows at the Paramount and to be able to come back 25 years later to that same magical venue to play these songs for our fans is truly overwhelming and humbling.

"I don't think any of us ever thought that we had made a record that would have such a profound effect on so many. I mean, we were proud of it, of course, and we loved what we had created, but to think that it was going to reach so many people and that it was still going to be as impactful 25 years later, no way. I think we are all amazed that it's 25 years old. [It's] very humbling, for sure, and I couldn't be more grateful that our fans still love what we do all these years later."

Peter stated: "I'm truly looking forward to getting back together with the guys where it started all those years ago. Playing the songs that literally changed our lives and continue to do so and to be able to play them in the Paramount with our fans there is going to be amazing!"

Bardi agreed, saying: "It is amazing. I mean, if you'd have asked me in 1993 if I thought we'd be playing this album for our fans in 25 years, I dont know how I would have responded. I think I would probably have said, 'I hope so,' but really I'm just amazed and cannot wait to celebrate these past 25 years with the guys and the fans!"

Scott added: "I'm so stoked to be reuniting with the three guys that changed my life immeasurably and presented the most magical moments I'll ever experience on this Earth. I love these guys and can't wait to play the songs from the album that catapulted our musical careers."

Joining CANDLEBOX in the celebration at the Paramount will be super special guests and longtime friends SWEETWATER and GREEN APPLE QUICK STEP.

Tickets for the Seattle show go on sale this Friday, January 19 at 10 a.m. Pacific time.

Original lineup reunion for one night only: