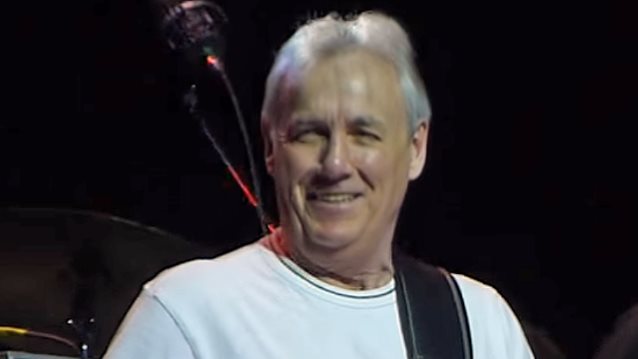 Original DEEP PURPLE bassist has told U.K.'s Classic Rock magazine that it's "strange" he isn't being inducted into the Rock And Roll Hall Of Fame alongside his former bandmates.

DEEP PURPLE — which has been eligible for induction into the Rock Hall for two decades now — will finally enter the Rock Hall as part of the class of 2016. Most of the members of the band's first three lineups are being inducted, including drummer Ian Paice, guitarist Ritchie Blackmore, late keyboardist Jon Lord, and various singers and bassists — Rod Evans; Ian Gillan and Roger Glover; and David Coverdale and Glenn Hughes.

Simper said: "The first I knew about the Hall Of Fame induction was when I read about it and fans were complaining that I wasn't being inducted.

"Maybe I am being naive, but I always thought that if a band gets into the Hall Of Fame, then all members, past and present, are part of it. Obviously not.

"Yes, it is a little strange that I am only only one from Marks I, II and III being left out, but I shan't lose any sleep over this. It's not as if I need to be given this award to know what we did in DEEP PURPLE made an impact. And I'm sure it wasn't a decision that came from the band.'

Simper added that there is no bad blood between him and the other members of the original DEEP PURPLE. He said: "I was in regular contact with Jon Lord before he died, and Ian Paice is always sending his best wishes through mutual friends like Bernie Marsden. And I have also toured with Don Airey, with whom I get on well."

Morse has been part of PURPLE since 1994, while Airey replaced Jon Lord in 2001.