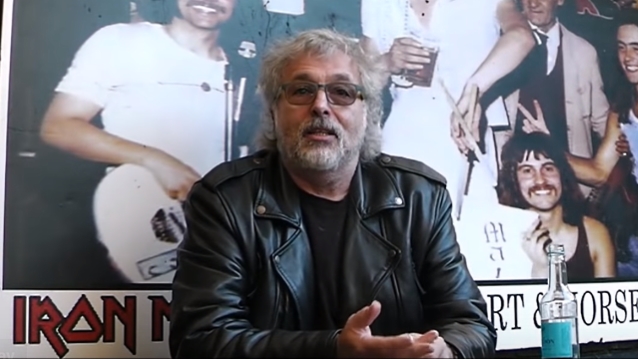 Over four years ago, the singer suggested in an online post that he had co-written "Strange World" but was never credited for his contributions.

Day wrote at the time: "This is my opinion. When I sang in IRON MAIDEN, it was a new pub band and nobody wanted to see or hear them. We were all nobodys all trying to make the best music we could and fighting for an audience.

"In 1976, photos/recording were next to impossible to have if you were poor boys from East London, so I cannot prove I wrote the words and melody for 'Strange World'.

"As for before the time of albums and recording deals, I would say it was creative theft, not deliberate, as probably I would have done the same thing myself to keep it clean and simple. I think, however, if it made me a mega amount of money in the future, I would have done the right thing and [made] amends. As back then we were all pulling for the same side and it still hurts to think the first-ever song I ever composed was on a big-selling album and nobody knows it was me. Not to mention how I scrape to earn a living while Mr. [Steve] Harris is living like a god!"

In a recent interview with Danish webzine Power Of Metal (video below),Day, who was with MAIDEN from 1975 to 1976, was asked about his supposed contributions to "Strange World", which appeared on MAIDEN's 1980 debut self-titled album. "That's something I really don't talk about anymore, if you don't mind," he said. "It's all good. It's all finished with. It's happened. That's good. I can't speak for anyone else. I can't speak for them, but I'm talking the present, because I've had this discussion. Everything's fine as far as that's concerned. I don't want to go down that road."

Day also talked about how he landed the gig as MAIDEN's first singer. "It's hard to remember the details, but I remember Steve being the bass player playing in a band at the Bridge House in Camden," he said. "It was GYPSY'S KISS. I knew the guitar player because he was maybe one year above me at school, but never knew him to talk to. I knew Steve and I thought, 'He's bloody good.' I heard he was only playing for three years and I thought, 'He's bloody amazing!' That was forgotten. I was working as a motorcycle mechanic in East London. I was outside the workshop and I saw Steve Harris and a group of guys walking past the workshop. I never really was in a band, I just worked with guitar players in bedrooms, just sort of learning, experimenting, because I wasn't really a singer. I just felt I could sing. So I said to the group of people and I focused on Steve because I've seen him before: 'I think I'm a singer. Could I join your band?' And he went, 'No.' I went, 'Okay, no problem.' I went back to work. A few days, or maybe a week or two later, Steve says, 'I couldn't say anything because the singer was with me of the band.' I don't know who it was and he says, 'Yeah, I'm interested. Do you want to come and have a blow?' So I did, they liked me and straight away, I was singing some of Steve's songs. He wrote some songs before the IRON MAIDEN period, they were in the old band. I sang and he wanted me to stay. I seemed to fit and then we started rehearsing. Then all the songs were being written and I was singing his songs."

Day was booted from MAIDEN in 1976 due to his supposed lack of stage presence. He was asked whether his departure had anything to do with its members' inability to deal with inter-band issues. "What happened to me, I think, was quite reasonable," he said. "It hurt me like losing a girlfriend that you had been in love with for maybe five years, losing a girlfriend suddenly. That's the emotion, but the thing is, for instance, Steve was saying, pardon me, I've got to let you know, that was my first real band. I never, ever sung with a drummer before, so I had zero experience. I just used to sing with records at home and had the patience to do. Steve was saying, 'You've got to get better. You've got to be more in the audience's face. You've got to be commanding. You've got to be a hero.' And I agreed with him, but I didn't actually know how to make that happen. I got warning for maybe three months: 'Get it together. Get it together.' And I wanted to, I just didn't know how to do it. So the funny thing is, the worst experience was the best lesson because when I got that notice and I felt so gutted, it changed me. The real reality. IRON MAIDEN at that time were nothing, honestly. It was the beginning… Everyone had to start from zero. That was when I was in the band, that was their zero point. What Steve was doing was trying to make the band big. He knew what he wanted. What he wanted is what he got. He got one of the biggest bands on the planet. As much as it hurt, as much as it upset me, I learnt a big lesson that day. I really did. I used that emotion, I guess, in my singing."

Last month, four-fifths of the original IRON MAIDEN lineup reunited for the first time in 42 years. Harris, who formed IRON MAIDEN on Christmas day in 1975, was photographed with Paul Mario Day and guitarists Dave Sullivan (1975 - 1976) and Terry Rance (1975 - 1976). Missing from the photo op was drummer Ron "Rebel" Matthews.

Day was replaced in MAIDEN by Dennis Wilcock. He went on to front SWEET and MORE while Rance still plays with AIRFORCE, which features former IRON MAIDEN drummer Doug Sampson.